"There's A Lot Going On Out Here" 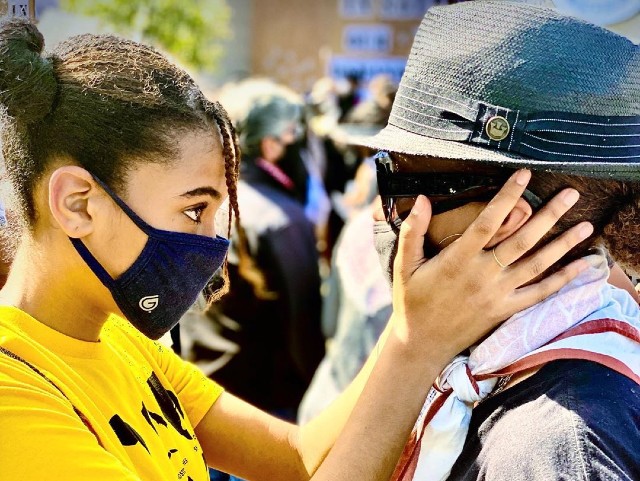 Boris Kodjoe, Nicole Ari Parker, and their kids joined protesters in LA this past weekend. The celebrity couple marched alongside their son, Nicolas, and daughter, Sophie, as activists demanded justice for George Floyd.

“There’s a lot going on out here,” Nicole Ari Parker wrote in an Instagram post. “They’re absorbing a lot of information from all angles,” the celebrity mom said of her kids and other children witnessing the uprising in the United States.

There has been civil unrest in America and throughout the world since the death of George Floyd in Minneapolis. The 46-year-old was murdered by a police officer on Monday (May 25) who ignored George’s pleas for air as well as the cries of bystanders who tried to tell the officer and his partners that Floyd was in distress.

“We assume they are as strong as we are,” Nicole Ari Parker wrote online. “As we and their grandparents had to be,” she added. “As a mom, we want to anchor their happiness and confidence and self esteem but can’t always keep up with the insane amount of news/hatred/violence/evil explanations, and preparations, and violations, and isolation … and still protect them. It hurts to take their innocence away in order to survive.”

It was just a few weeks ago that Nicole Ari Parker and Boris Kodjoe took their kids to Ghana for an unforgettable experience. Both Nicole and Sophie stood in a spot in the Cape Coast Castle Dungeon where Africans were prepared for implementation into the Atlantic Slave Trade.

“Sophie found me, grabbed me and held me tight,” Nicole Ari Parker shared along with a picture from the moment. “There are no words,” the celebrity mom said. “Only an inner promise as a people to keep holding each other tight.”

DEVIN MCCOURTY AND HIS WIFE GRIEVE LOSS OF STILLBORN DAUGHTER