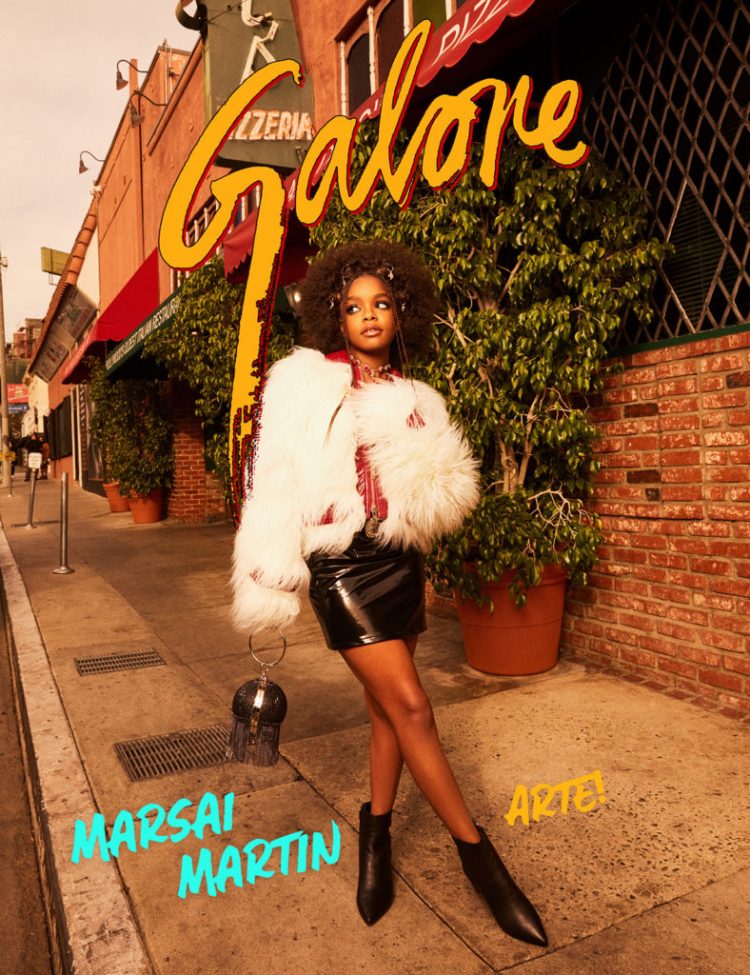 Actress, producer, fashionista, activist, and much more are some of the titles that 15-year-old Marsai Martin wears well as she busily builders her empire.

Having expanded her interests beyond her breakout role as Diane Johnson on the ABC hit series, Black-ish, this talented teen is making money moves like no other. Recently, the talented teen sat down with Galore Magazine to talk about her future, being a teen in Hollywood and much much more. Check out what she had to say in her entire interview below. This is one rising star who has just begun to shine!

How does it feel to accomplish so much at such a young age? Have you ever given yourself time to fully absorb all of your accolades?

I feel like I’m just still taking it one step at a time where everything is going at a normal pace for me. So, I honestly don’t think it really has done something just yet because I am being myself. I don’t really see it as like, “oh, I did something huge,” I really do see it as, “oh, it’s something cool that I did and there were so many people involved.” I think a lot of people that are in the industry think that way as well because they are really just being themselves.

What has been the most special memory for you since becoming an actress?

It would have to be Little. Being a part of that whole situation and really getting a good glimpse of what it is like being behind the scenes. That was probably my most memorable memory — or looking back, it’s me realizing how Black-ish changed my life. Do you have plans to go to college while continuing to act and produce?

I don’t really see it in my future, but I’m honestly not really sure. I mean maybe when I get a good glimpse of what [college] looks like and feels like. I’m still goofy, so I’m really figuring out what high school is like, so when I get to that point I’ll figure it out. I don’t want to rush anything, I don’t want to say yes or no now just in case I change my mind in the future.

Was acting always a part of your dreams? Or, did it kind of fall into your lap unexpectedly?

I am going to say both. I feel like I’ve always had that talent in me and it’s been in my genes for the longest time. I am pretty young, so I was not sure if that was really what I wanted to do just yet. The more I grew, the more I really witnessed how much of a possibility it was for me and then not just acting, but going to the producer side and being a creator of all types of content. So, the more I grew, [the more] I realized what I wanted to do.

What has been the hardest part about being so young and fully-immersed in Hollywood?

I’m not going to lie, I can be pretty shy at times. I think it’s getting to meet new people and seeing how they work and what they do, especially with Little. I initially felt more comfortable being with the Black-ish crew from knowing every single person on set and then going to a whole new world was very uncomfortable for me at the time.

Who has inspired you the most in your coming-of-age?

Definitely my parents. Mostly because they have done so much for me and sacrificed almost everything to believe in this young girl’s dream. How has it been working on set with the cast of Black-ish since you have pretty much grown up throughout the series for the entire world to see?

It has been a fun time, especially knowing Anthony, Tracee, Lauren, and Jennifer before I even started working with them. It was such a cool experience and of course for me since it was my first TV show ever and I didn’t know how long it was going to last. If you asked me the same question a few years ago, we did not expect Black-ish to come this far. So, especially growing up with them and working with them, they are really becoming a part of my family.

Do you make a lot of your business deals for yourself? Or, do your parents have the final say?

I definitely have a lot of creative control in my career. It starts with all of us honestly. Of course, my parents have the final say, but of course, it is still a whole team effort. We really do talk about it and give each other feedback and then we have the final say altogether. But in reality, they make the real business move, you know, especially since your girl is still a minor.

How was producing Little with Issa Rae and Regina Hall?

It was amazing. It has been such a great experience. I love Regina. It has truly been such an honour. Every time I see her, she always gives me hugs, kisses, and love. She is like an auntie to me. We have developed an amazing relationship since she is someone who is super dear and caring and sweet and all she wants is the best for me and vice versa. I am super fortunate to have her by my side moving forward now. What other young actors/actresses around the same age as you would you love to work on set with?

I would love to work with people that are my age in the industry right now. They’re all doing amazing things. I am not sure what type of movie I would want to put them in, but I would love to create with them. There are so many people to work with. There’s Storm, there’s also Skai. There are so many people that I love truly and that are doing great things as well that I want to be a part of.

Which artists do you listen to pump you up before a scene?

Tyler the Creator is my all-time favorite rapper.

What was the most difficult scene for you to act in? And, produce?

The colorism episode on Black-ish, that whole paragraph with me talking was pretty tough for me because I wanted that scene to be really good. What does the future of Hollywood look like to you?

Superhero wise, it would be so cool to play Storm. If I could make up a superhero idea, that would be so fun. I have so many great ideas. Action movies, stunts, and fantasy are some of my favorite type of films. Super intelligence would be a great superpower.

What words of advice do you hold near and dear to your heart the most? And, why?

There are so many people who give me different advice every day. What I see as great advice is seeing creatives perform their talent. I get to witness my advice with my own eyes and how they are in the industry so I don’t need to be told advice all the time.

Finally, what future projects are you most excited about for 2020?

There are so many movies and content that are coming down the pipeline soon. The upcoming project with Mandeville and Don Cheadle will be amazing. I also have Step Monster with my own production company, Genius Productions. Also, be sure to look out for more videos on my new YouTube Channel and subscribe as I have some cool ideas coming to life on that platform!