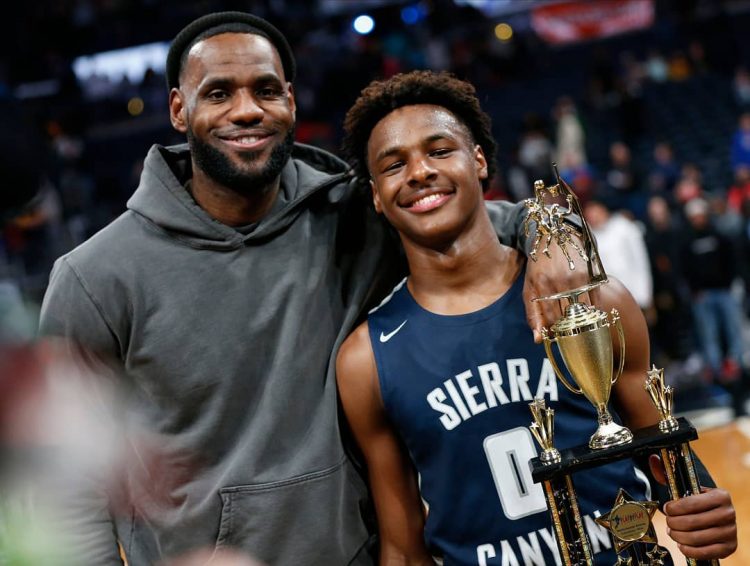 In the final minute of the game with Sierra Canyon down by one point, freshman James Jr. stole an inbound pass, charged to the hoop and made a smooth layup, which turned out to be the game-winning basket for Sierra Canyon. Ironically, James Jr’s clutch layup came after he missed a potential three-pointer to tie the game on the previous possession. James Jr. finished the game on 7-10 shooting from the field, scoring 15 points off the bench, including the game-winning layup.

LeBron James, who played for St. Vincent-St. Mary and led them to three state titles before going directly to the NBA, flew to Columbus, Ohio to watch James Jr. play after his Los Angeles Lakers defeated the Miami Heat, 113-110 on Friday night. The game was the first of James Jr’s high school games that his father attended, and James along with his wife Savannah, stood courtside and celebrated their son’s clutch play. James Jr. was awarded the game MVP for his efforts and after the game, James Jr. took pictures not only with his father, but also with his father’s former teammates and St. Vincent-St. Mary coach Dru Joyce II, who coached James during his time at St. Vincent-St. Mary. James wrote a post on Instagram detailing the special night afterwards:

“Last night was such a surreal feeling for me! Watching my son play in our home state vs my Alma mater St. VM who’s still being coached by my mentor, father figure, guy who coached and helped guide me throughout my childhood both on and off the floor Coach Dru Joyce II. In front of family (wife, daughter, mom, sister in law, father in law, cousins, etc) friends that included my best friends who I grew up with and still to this day have an unbelievable relationship with and we dub ourselves the “Fab Five”. For @Bronny to play the best game of his young high school career so far, make the biggest play of the game and to walk away winning the MVP in his/our home state and his family and friends was a story book moment. So so so eerie but I know it was SPECIAL and meant the world to me to be there in attendance! Can’t even lie I was nervous as hell for him but damn he was poised and controlled. WHAT AN UNBELIEVABLE NIGHT it was! Thank you man above.”

'THE MASKED SINGER' WINNER, WAYNE BRADY, HAD THE SUPPORT OF HIS EX-WIFE AND DAUGHTER THROUGHOUT THE SHOW

'THE MASKED SINGER' WINNER, WAYNE BRADY, HAD THE SUPPORT OF HIS EX-WIFE AND DAUGHTER THROUGHOUT THE SHOW