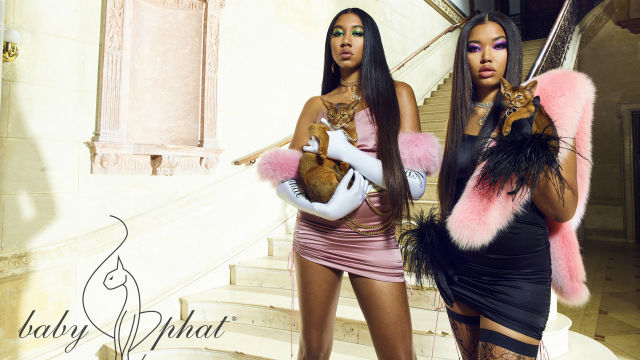 After a 10-year hiatus, the iconic clothing brand Baby Phat is back. Former model Kimora Lee Simmons (ex-wife of mogul Russell Simmons) officially relaunched her legendary fashion brand on Friday, December 6. Simmons’ kids, 19-year-old Ming Lee and 17-year-old Aoki Lee (whom she had with Russell Simmons), star in the company’s new 2019 Holiday ad campaign, which showcases a collection of updated versions of the brand’s early 2000’s popular trends on babyphat.com.

However, Phat Farm’s success would not last; due to the over-saturated hip-hop clothing market and market discrimination against African-American fashion brands, Phat Farm ended up inevitably failing. In 2004, Russell Simmons sold Phat Farm and Baby Phat to the Kellwood Company, and in 2010, Kimora Lee Simmons resigned from her role as Baby Phat’s creative director, which thus marked the end for Baby Phat.

Here, kitty, kitty! 😼 Sign up for our emails at @babyphat to be the first to know about our new line 💎💗✨

10 years later, Simmons re-acquired the rights to Baby Phat and in June, she released a pilot program with fashion brand Forever 21: Baby Phat x Forever 21. It featured a trendy collection of Baby Phat’s designer clothes, which sold out online in a day. As of December 6, Baby Phat has officially returned with its 2019 Holiday collection, and the company will release new items continuously, with a second launch later in the month.

Pants free for finals? 🏎💨! 💕Sign up to the @babyphat email list to be the first to know about the new collection 💕 #thecatisback #stablegenius

On relaunching her iconic company, Simmons announced in March that her daughters would also be leading the new era of Baby Phat, saying: “Here we are again, 20 years later in 2019, and now [my daughters] are with me taking the reins. This is a woman-owned company, run by me and my daughters. I’ve been in fashion for 30 years. But now it’s about passing the torch from one to the next.”