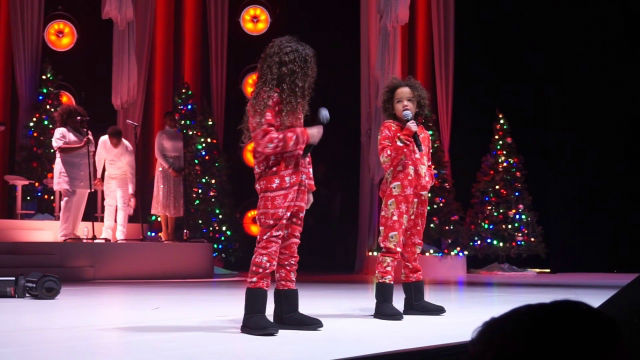 Mariah Carey opened the “All I Want For Christmas Is You” tour at Caesar’s Palace on Friday (November 22) with her kids, Monroe and Moroccan, by her side. The celebrity mom watched with pride as her children delivered their first live duet ever.

Monroe and Moroccan sang the lyrics to “Rudolph the Red-Nosed Reindeer” after giving the crowd a cute skit. The kids were dressed in their pajamas, which made the presentation that much more precious. Many fans were impressed by Monroe and Moroccan’s vocal abilities, which were nothing short of advanced for their age.

“Rocky sustained that note better than your faves,” one YouTube viewer wrote after watching the duet. Another fan praised Monroe’s singing abilities. “And just when Ariana thought she would take over,” the viewer said.

Monroe and Moroccan have gotten a lot of practice in with their mom in terms of singing and performing. Mariah often brings her kids on stage during her shows so that they can get a feel for the crowd and learn how to entertain fans. Monroe and Moroccan are also featured alongside their mom on the Mixed-ish theme song. Roe & Roc were so ready for their Christmas duet debut!

Mariah Carey recently told Yahoo! Entertainment how much she loved the Christmas season. “People don’t understand,” Mariah said. “This is my entire focus of my year is Christmas,” she shared.

Go here to find out if Mariah Carey’s “All I Want For Christmas Is You” tour is coming to your town!

Post Views: 196
Tags: All I Want For Christmas Is You TourChristmas 2019Mariah CareyMonroe and Moroccan
ShareTweetShareSend
Previous Post