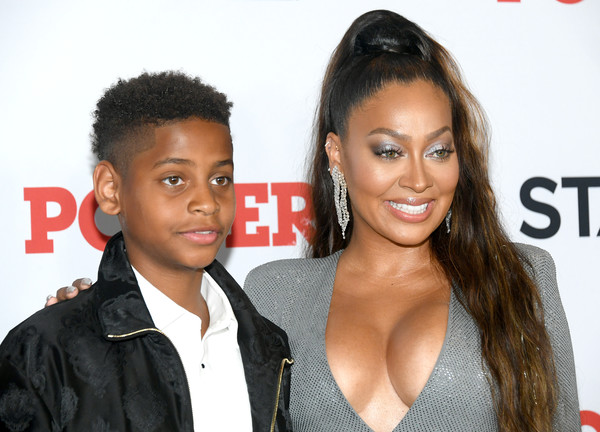 Carmelo Anthony’s wife, La La Anthony, made sure their son, Kiyan Anthony, did not miss his dad’s historic win against Chicago on Monday (November 25) night. The celebrity mom FaceTimed Kiyan so the teen could interact with his dad at the big game.

La La was sitting near the front when she decided to hold up her phone so that both Carmelo and Kiyan could see each other. In the end, Carmelo scored 25 points and gained eight rebounds while delivering two assists. The Portland Trail Blazers beat the Chicago Bulls and Kiyan got to see it, thanks to a bit of technology.

It was just the other week that La La Anthony shared the news of her decision to not accompany Carmelo to Portland with Kiyan. The celebrity mom told her fans that her son was his father’s biggest fans.

“He is his dad’s #1 fan and super excited for this new opportunity,” La La told her social media fans. “When it’s all said and done, he’s still a 12-year-old that is going to miss his dad,” she continued. “Portland you got a great one,” the celebrity mom concluded.

He is his dad’s #1 fan & super excited for this new opportunity…but when it’s all said and done, he’s still a 12yr old that is going to miss his dad 😢🙏🏽🏀Portland you got a great one 🏀🙏🏽#portlandtrailblazers #stayme7o

La La and Carmelo Anthony have been working on their relationship as co-parents since separating earlier this year. There was a period in which fans thought the celebrity couple would come back together and make their marriage work. Such a theory dissipated, however, with La La confirming her plans to move forward with life apart from Carmelo.