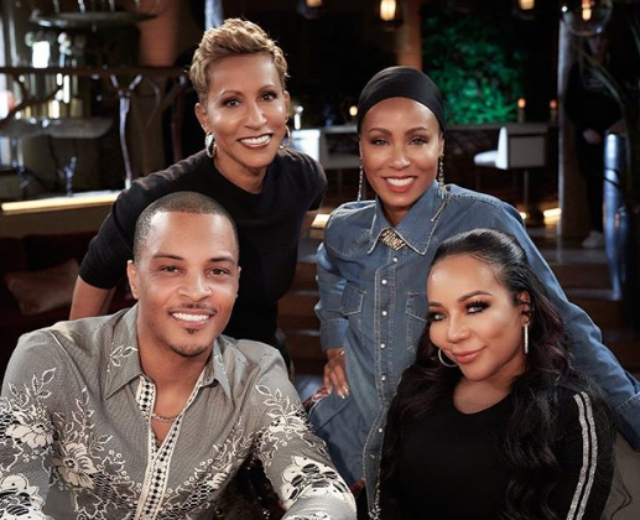 T.I. and his wife, Tiny Harris, came on Red Table Talk to explain what many are calling “Hymen-gate” to Jada Pinkett-Smith and her mom, Adrienne Banfield-Norris. The celebrity couple addressed the storm of criticism that followed T.I.’s comments on a recent episode of the podcast, Ladies Like Us.

“I came to clear up any misconceptions that have been surrounding how we (T.I. and Tiny) interact and parent, and what is appropriate and inappropriate,” T.I. said in the episode of Red Table Talk. “I think all of this is surrounding a conversation that I had in a very joking manner when asked how do I deal with parenting in this day and age,” the celebrity father explained. “And so, from a place of truth, I began to embellish and exaggerate. And I think a lot of people took it extremely literal.”

T.I. went on to tell Jada and Adrienne, “I honestly thought people knew me better than that.” The celebrity father further explained, “My intentions, I think, have been terribly misconstrued and misconceived. Let me set this record straight: I never said I was in any exam room. That is an assumption. That is a falsity. I never said it was being done present day, [with her] as an 18-year-old. And I never said that her mother wasn’t present.”

Mrs Harris and I sat down with Jada and Gammy @redtabletalk. (unfortunately @willowsmith was on tour and couldn’t make it🥶)Thank you ladies for a conversation long overdue and for a moment that I hope lifts us all. (Although I’m certain there’s someone right now conjuring up a way to misinterpret my words as we speak) Even still I’m appreciative of the ladies’ willingness to impart wisdom & make this a teachable moment for US ALL🙏🏽👑…. Side Note: @willsmith got df on ASAP 🤣🤣 🏃🏽‍♂️💨 I owe u 1 sir😂 #RedTableTalk #RealTalk OUT NOW @jadapinkettsmith @adriennebanfieldnorris #redtabletalk

Tiny Harris also chimed in the conversation with the information she knew about the incident. The celebrity mom was sure to point out that Deyjah was 16-years-old at the time of her father’s gynecologist visit alongside her mom.

“They went together,” Tiny said. “Most fathers don’t go [on gynecologist visits with their daughters], but he was just present. He didn’t make the doctor’s appointment. It was already [made].”

Tiny went on to tell Jada and Adrienne that she understood the backlash that T.I. received from the public and his daughter even though he didn’t quite get it. “I definitely understand why she would feel like it’s personal to her,” Mrs. Harris said. “Deyjah’s our quiet child. She doesn’t talk a lot. You have to nudge things out of her.”

Look who sat down with the Queen herself @jadapinkettsmith & her amazing Queen @adriennebanfieldnorris on @redtabletalk Make sure u tune in on Mon. to hear one of the realist interviews the hubby @troubleman31 & I have ever done together. #RedTableTalkWasARealVibe 👑🙌🏽

In the end, T.I. was sure to apologize to his daughter for embarrassing her with his comments. “I am incredibly sorry to her for that … to you, sweet baby Deyjah,” the celebrity father said. T.I. went on to tell Jada and Adrienne that his daughter “understands my intentions. She knows who I am. She knows who I’ve always been. I think that allows a certain level of understanding. It’s just the outside noise.”