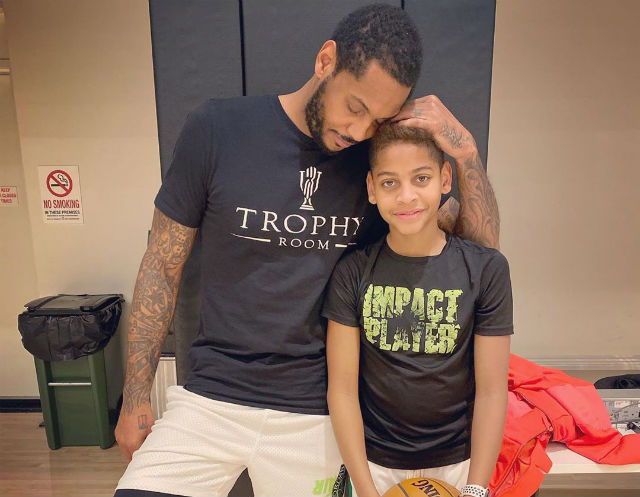 NBA star Carmelo Anthony is finally making his return to the NBA. After over a year as a free agent, the ten-time NBA All-Star was recently signed and is now a member of the Portland Trail Blazers. Carmelo Anthony’s ex-wife, actress La La Anthony responded to the news on Sunday with a bittersweet Instagram post of their 12-year old son Kiyan and Anthony sharing an apparent farewell, saying that Kiyan will still miss him. In the caption, La La wrote: “He is his dad’s #1 fan & super excited for this new opportunity…but when it’s all said and done, he’s still a 12yr old that is going to miss his dad. Portland you got a great one.”

He is his dad’s #1 fan & super excited for this new opportunity…but when it’s all said and done, he’s still a 12yr old that is going to miss his dad 😢🙏🏽🏀Portland you got a great one 🏀🙏🏽#portlandtrailblazers #stayme7o

Many of Anthony’s friends also congratulated and celebrated him on his signing, including three-time NBA champion Dwyane Wade, who said on Twitter: “It’s about damn time!!” and three-time NBA champion Lebron James who responded, “Right!!!!” to Wade’s post. Utah Jazz star Donovan Mitchell celebrated Anthony, saying: “Bout time!” NBA Hall of Famer and Anthony’s former teammate Allen Iverson congratulated him on Instagram, saying: “Thank you to the @trailblazers organization for giving my guy @carmeloanthony a chance! Show up and show out killa!”

So this kid of mine has been asking us for a dog everyday for 2 years straight. I love dogs but didn’t think it was the move in a New York City apartment. As you can see he won the battle🤣❤️look at his face‼️thank you to @tycalk9 for getting us the puppy and @annatankdogs for helping us take care of him everyday ❤️we are officially part of the Boxer club with our new puppy SEVEN 🐶❤️ #boxersofinstagram #boxer #boxerpuppy

Anthony last played on November 18, 2018 with the Houston Rockets last season, who released him after ten games. Since then, Anthony was a free agent until the Trail Blazers signed him last week to a one-year, $2.1 million deal. The deal is non-guaranteed, but it will become fully guaranteed if Anthony is not waived by 5 pm on January 7, 2020. The Trail Blazers have recently activated Anthony, and he is expected to make his Trail Blazer debut on Tuesday night wearing jersey No. 00 against the New Orleans Pelicans. On playing for the Trail Blazers, Anthony said: “I’ve always kept my eye on Portland. It just didn’t work out other times, but now it seems like it’s a perfect opportunity.”

Dinner Date with my favorite human🖤 (told him when he gets older & u go to dinner at someone’s house, bring a bottle of wine, some dessert, something. Don’t be walking up in people’s houses empty handed eating up all their food🤣🤣🤣)