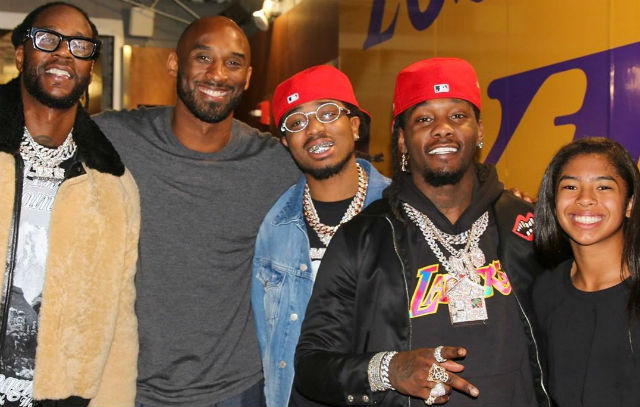 Kobe Bryant and his daughter, Gianna “GiGi” Bryant, were front and center at Sunday night’s basketball game at the Staples Center. The Los Angeles Lakers competed against the Atlanta Hawks for a final score victory of 122-101. Kobe and his daughter cheered for the Lakers every step of the way.

One segment of Sunday’s game that was particularly special came when LeBron James came over to recognize Kobe Bryant’s presence. The star athletes had a few words before James got back to business on the court. Kobe appeared delighted to have gotten the attention of LeBron in a moment that some fans deemed as a highlight of the evening.

Kobe Bryant’s attendance at Sunday’s game was two-fold. First, the celebrity father came to enjoy a night of basketball with his daughter. Kobe was also in the building to promote his latest children’s book, Epoca: The Tree of Ecrof.

Epoca is set in a world dominated by magical powers and sports. Rovi and Pretia are two of many highly talented athletes attending the elite sports academy, which is designed to help players hone their craft. The kids are there to improve their skills. There is, however, something evil brewing in Epoca. How will things turn out in the end? You will, of course, have to read the book to find out!

Kobe Bryant recently told the press that his younger daughters, Bianka and Capri, will know him for the publisher that he has become and not the NBA star that he was before retiring in 2016.

“[I want to be remembered] as a person that was able to create stories that inspired their children and families to bond together,” the celebrity father shared. “And for the children to dream,” he continued. “Then have the initiative to wake up every morning and do all they can to help that dream become a reality, you know, that would be really, really cool.”

Mambacita and her daddy watching the @lakers game tonight. 💜💛