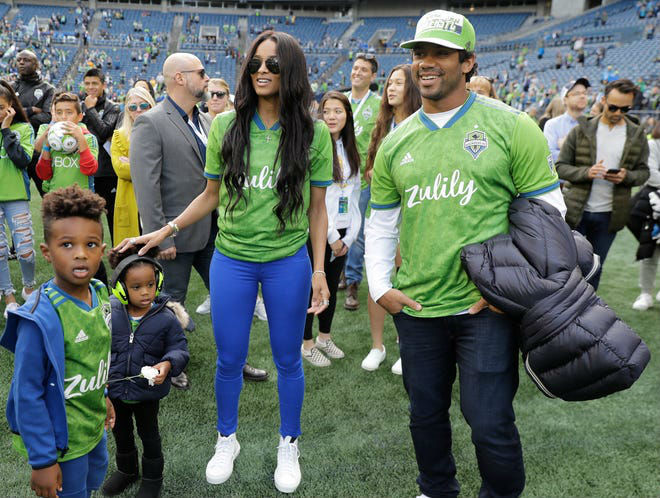 Ciara and Russell Wilson celebrated the Seattle Sounders’ championship with their kids, Future Zahir and Sienna, this past weekend. The soccer team gained victory over Toronto on Sunday (November 10) with a final score of 3-1.

The Wilsons wore Sounders gear to support the team in its quest for a championship win. Ciara, Russell and the kids also took a picture with the trophy after the soccer team’s success. “Forever a special day,” Ciara told her Instagram fans. “[It] will be cool to touch the new Cup,” she exclaimed. Future Zahir was photographed while touching the championship cup. Little Sienna still appeared to be in shock about the win.

Russell Wilson expressed his desire to see the Seattle Sounders come out of the playoffs as the victors during an interview before Sunday’s big game. “Hopefully, we win,” the NFL player said. “For the Sounders, that would be huge. Obviously, we wish we could be here to watch it. We’re going to be traveling on the road. I know it’ll be a great MLS championship game. I’m picking the Sounders, 3-1. I’ll go 3-1.”

Ciara and Russell Wilson became co-owners of the Seattle Sounders in August. The celebrities joined ten other families in the venture.

“Seattle means so much to me and Ciara,” Russell told the press at the time. “We’re fired up about being part of the Sounders for a long, long time, having ownership in the Sounders and continuing to build that winning culture.”

With a fresh championship in tow, there is no telling what the Sounders will do in the coming months. Stay tuned for more celebrity family news!