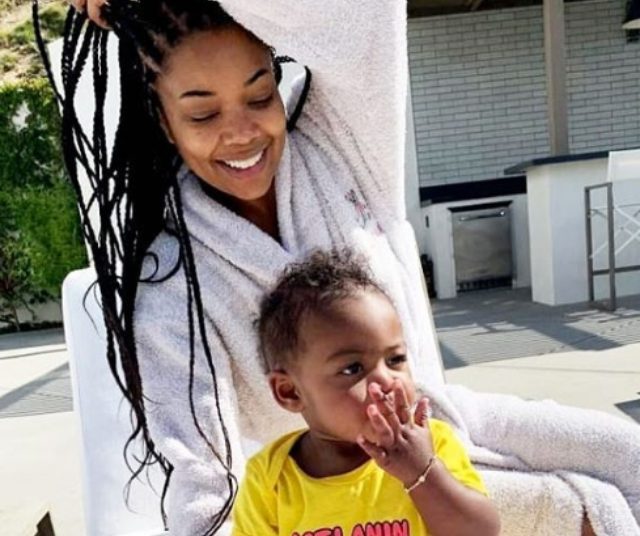 It’s Kaavia James Union Wade’s first birthday and we are ready to show you some of the shade that Shady Baby has given this past year. Gabrielle Union took to Instagram to celebrate her daughter’s first birthday on Thursday (November 7).

“Baby turns 1,” the celebrity mom exclaimed. “To say this lil nugget came into our lives and changed everything, would be an understatement,” Gabrielle added. “@kaaviajames has been such a gift and blessing to our family and literally everyone she meets. Y’all, I’m still in shock she’s even here much less walking, talking, swimming and eating bacon!”

Kaavia James entered the world giving us the side-eye and other expressions that put us in our place. Take a look at how Shady Baby responded to the challenges and revelations that came her way during the month of October in the list below!

1. Kaavia was so over Halloween

Her parents may have been excited about celebrating Halloween 2019 with their daughter. Kaavia, however, was not about that costume life. “I told them this was it,” the photo’s caption read. “Last costume. Enough. Like… enough.”

I told them this was it. Last costume. Enough. Like… enough. I'm giving "Sour Flower"

2. Shady Baby on her mom’s birthday

Gabrielle Union’s birthday took Kaavia by surprise last week. The youngster didn’t know that the system worked like that.

Wait… My mama HOW old?!?! How old y'all mamas cuz mine always complaining bout her hip 👼🏾

3. She’s not feeling your greens

Kaavia does not play when it comes to food. Everyone knows that you cannot eat everyone’s greens. You just cannot!

Someone tricked her into wearing a costume that resembled a pumpkin! Kaavia dressed up for the holiday that wasn’t on October 12, 2019, and her facial expressions tell the story of her disgust.

Soooo Oct 10th ISNT Halloween?!?! So why am I dressed as a lil pumpkin… you know what, nevermind. I already know, those 2 eager beaver fools.

She had her bow and cheer outfit. Kaavia was ready to back her mom up in a few routines in this shot that gave us vibes of Gabrielle Union in Bring It On. We would really love to see Shady Baby in a remake of the film down the road!

"Tried to steal our bit, but you look like…" finish this cheer 📣

Christophe Kyle is proudly supporting a local Black-owned business and writing phenomenal reviews that are...