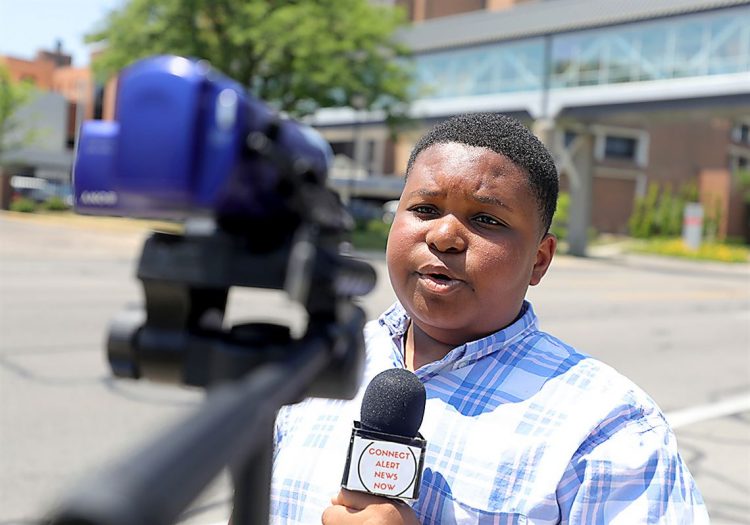 While most 11-year-old sixth-graders are trying to navigate middle school, figure out what clubs they want to join, and are trying to just to blend in, Jaden Jefferson is busy making a name for himself in the tough world of journalism. The Toledo, Ohio native writes, shoots, produces, and edits his own news stories for his very own new outlet, proving that he is not afraid to ask the tough questions that everyone wants to hear.

“In the mornings it can get hectic,” Jefferson said in an interview with CBSNews.com. “Because if I get breaking news I try to print out that story, read over it, and then post some stuff to social media, write a web story for it, so it’s a lot. I’m serious about what I’m asking. I’m not laughing, joking, kidding… It’s me asking a serious question and getting a serious response.” Jefferson told the news outlet that his passion for the news started with his love of writing and his gift of tech. “Writing is something I always love doing in school, always something I love doing outside of school. So these are really things that I love doing, that I wanted to bring into a career.”

So, what stories does Jefferson like to cover the most? Well, that would be politics. “Politics is an exciting thing we’re talking about, here,” he said in his interview. “This affects us all, and, I mean, there’s 22 Democratic candidates, and that’s really something interesting to cover.” In addition to having met and spoke with Senator Elizabeth Warren and Congressmen Tim Ryan, the preteen also has the opportunity to tell his story to Ellen.

Needless to say, Jefferson is unquestionably gaining attention in his community. So much so, his local mayor not only knows his name but also respects him as a professional.

“When he first started showing up to public meetings and gatherings with his camera in tow, I assumed it was some sort of a class project,” Mayor Wade Kapszukiewicz said. “[He] makes the world a better place. I know it sounds corny…If we had more people like him, I’d go as far as to say we’d have a better quality of journalism, a better understanding of facts, we might just have a better world, too.”

This amazingly talented young man is definitely going to bring a higher quality of truth journalism. We cannot wait to see what the future holds for him. If you aren’t among his thousands of social media fans, click here to follow him on Instagram. And click here to see his latest interview with Oprah.