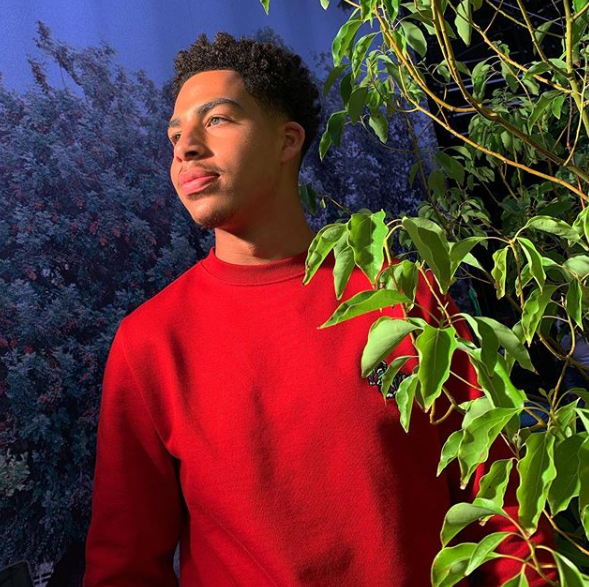 Marcus Scribner is definitely one actor who believes in using his career to create and be involved with projects that “create positive images. Recently, the 19-year-old superstar sat down with UPI to tell the world more about how he wants to inspire change in the community.

Do i just have sensitive eyes, or does everyone struggle to keep their eyes open for photos in the sun 🤔

Scribner on taking the responsibility of taking on roles that reflect people who look like him.

I feel like it’s our job as actors to create positive images, and I feel like it really affects people as kids. Growing up, I used to watch Everybody Hates Chris, The Proud Family, things like that. So being able to see those characters who looked like me on the screen always made me feel good. And I feel like I have a little bit of Junior in myself, as well, so it’s nice to see a character like that on TV that you don’t get to see too often. I hope to do that with my work, whether it’s She-Ra or Black-ish … making sure that I’m doing positive things for the community, but also people who look like me.

Scribner on why people connect with his character on Black-ish.

He’s set out on his own, he’s decided not to go to college,” Scribner said, “so we’ll see how that cracks out for Junior. He’s definitely trying to find his own path and doing what he believes in, which I think is extremely important. I think it’s kind of cool that our writers are very open to allowing our characters to evolve. Junior’s definitely grown up with me, we’ve experienced a lot of similar life experiences and it’s super cool to have that kind of parallel art-reflecting-life situation. There’s definitely a little flavor the writers have added from me.

Scribner on being homeschooled and not feeling like he “missed out”.

I’m from Los Angeles, so I have a ton of friends who are in L.A. I went to like three proms, multiple homecomings, I never really felt like I missed out on anything, because everybody that I know is already here. Even with college, I have a ton of friends who go to UCLA and USC. Just going up there and visiting them has kind of given me a little bit of the college experience, what it’s like to share a bathroom and a dorm room — kind of intense!

This is more than just a cause. It's a fight for survival. Every other week there are new stories of military grade weapons being wielded by mentally unstable individuals filled with hate to cause mass amounts of violence. It's important to me that stricter laws are enacted because this can and is happening across the country. It's an epidemic. Even if you don't know someone who has been affected, it can happen at any second to anybody and change the course of people's lives. I think it's our jobs as fellow human beings to further the common good, and reel in greedy politicians and enact our right as voters to put a stop to mass shootings. It shouldn't be easier as an 18 year old to walk into a mall and buy an ar-15 than it is to buy a beer. We need to come together and realize this collective goal. @wieldingpeace @thecameronboycefoundation

Scribner on his future in acting.

[I don’t expect to leave show business anytime soon.] As soon as it stops being fun will be the moment where I don’t know if I can do it anymore, but I don’t foresee that ever happening,” he said. “I started around the age of 7 and just haven’t gotten bored yet. So I think I’m just going to continue along this path and continue to expand and keep on learning, keep on growing as a person, expanding my platform and using it to create change.

And of course, we don’t want him to either. Big things are in store for this talented young star in front of and behind the camera. He is a talent that hopefully will continue to inspire viewers for many generations to come. To read the UPI interview in its entirety, click here.