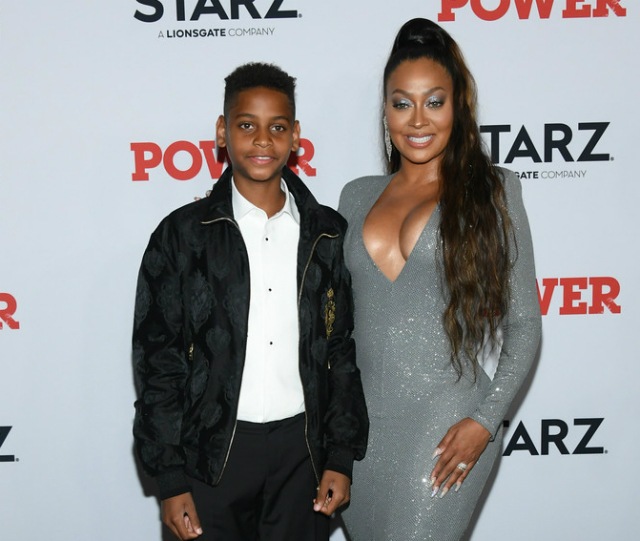 La La Anthony is not ready for her son, Kiyan Anthony, to start dating. The Power actress tells Us Weekly exclusively that the thought of Kiyan bringing home a girl for her to meet during his teen years scares her.

“I’m terrified [of his teenage years],” the celebrity mom admits. “I’m completely terrified [of] girls,” La La adds. “He’s starting to like girls, and … that scares me.” Kiyan’s new stage in life is causing his mom to keep “a close eye on him.”

Keeping a close eye on her son does not mean smothering his independence, though. “He’s, like, past me trying to pick out clothes for him now,” La La admits. “I’m like, ‘You should wear this,’ [but] he knows exactly how he wants to dress. He loves sweatsuits, he loves [activewear]. He’s very particular about his sneakers. He has his own style, for sure.”

My whole heart is growing up so fasssttttt….and these little girls now!! 😱😱😱😱😱😱SOMEBODY HELP‼️‼️🤣🤦🏽‍♀️🤣

It may be safe to say that Kiyan Anthony gets his style from both his mom and dad. Carmelo Anthony is, after all, viewed as one of the more fashionable athletes in the NBA. La La also has a following in the industry as the owner of a fashion line that caters to women of various sizes and curves.

Does La La Anthony see herself as the mother of two children in the near future, though? “I’m done,” the celebrity mom tells Us. “My son has fulfilled me in every single possible way, so I think I’m done, yes. [Motherhood] changed my life. My son is my best friend. I live for my son.”

IS RIHANNA PREGNANT? THIS IS WHY FANS THINK SHE IS EXPECTING WITH BOYFRIEND HASSAN JAMEEL