BARACK AND MICHELLE OBAMA’S DAUGHTER, SASHA OBAMA, IS SET TO BEGIN COLLEGE AT UNIVERSITY OF MICHIGAN 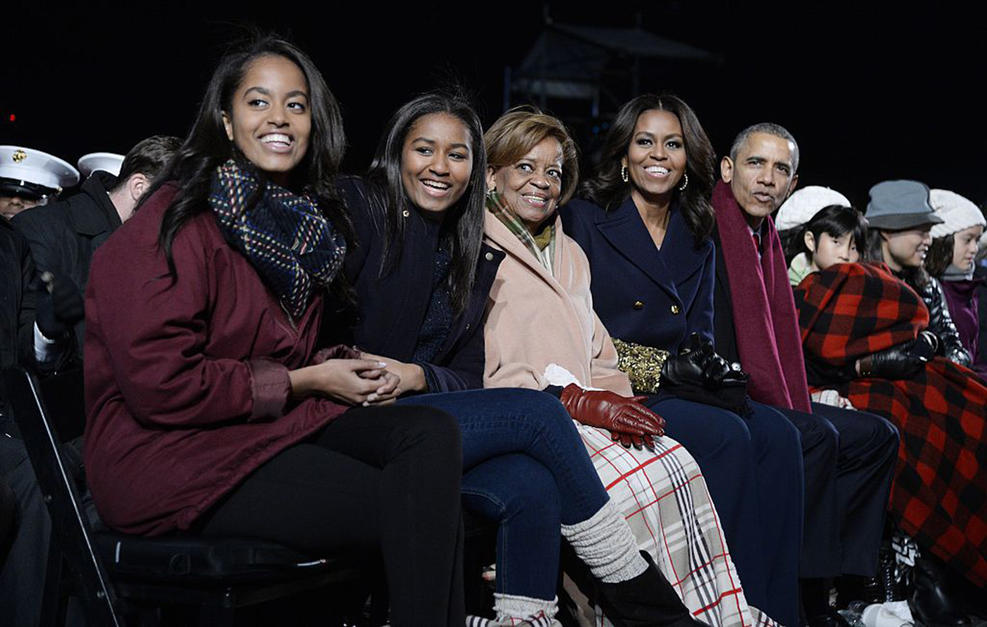 The Obamas are united for the cause at the 2015 National Tree Lighting ceremony.

As summer winds down, Michelle and Barack Obama are planning to send their youngest daughter, Sasha Obama, off to college. Sasha starts classes at the University of Michigan next week!

Several spotted Sasha Obama on campus earlier this week. “I was walking by, pushing a vacuum, and she walked out right in front of me,” one student told the press. “I said, ‘Excuse me.’ It was a crowded hallway with her and some Secret Service dudes. … It’s pretty cool.”

Just like that she's all grown up. The Obama girls really are our natural treasures and they must be protected at all cost 😭🇺🇸

Michelle Obama recently discussed Sasha and her older sister Malia’s life in the White House during their father’s presidential terms. “Imagine having Malia and Sasha come to your house for a sleepover,” Mrs. Obama said. “This is the call: It’s like, ‘Hello. OK, we’re going to need your Social Security number, we’re going to need your date of birth. There are going to be men coming to sweep your house, if you have guns and drugs, just tell them yes because they are going to find them anyway.'”

Michelle Obama’s motherhood advice to Meghan Markle ❤️ for @britishvogue @michelleobama ・・・・・・・・・・・・・・・・・・・・・・・・ “Being a mother has been a masterclass in letting go. Try as we might, there’s only so much we can control. And, boy, have I tried—especially at first. As mothers, we just don’t want anything or anyone to hurt our babies. But life has other plans. Bruised knees, bumpy roads and broken hearts are part of the deal… Motherhood has taught me that, most of the time, my job is to give them the space to explore and develop into the people they want to be. Not who I want them to be or who I wish I was at that age, but who they are, deep inside. Motherhood has also taught me that my job is not to bulldoze a path for them in an effort to eliminate all possible adversity. But instead, I need to be a safe and consistent place for them to land when they inevitably fail; and to show them, again and again, how to get up on their own.” -Michelle Obama, former First Lady and mother to Sasha, 18, and Malia, 21, to Meghan Markle in British Vogue. . . . . . . #motherhood #newmom #michelleobama #meghanmarkle #archie #maliaobama #sashaobama #momfriends #mothersanddaughters #passportbebe

“‘Don’t lie, they’re not going to take them, they just need to know where they are. And, uh, thank you for having Malia and Sasha over. Oh, and by the way, there is going to be a man with a gun sitting outside all night. If you let him use the bathroom, that would be nice.'” Michelle concluded by saying that she was surprised that her daughters still had friends given everything that Sasha and Malia’s pals went through during the White House years.

Nevertheless, Sasha and Malia maintained a healthy balance between social living and academic studies. Sasha begins her freshman year at the University of Michigan on September 3, 2019.

RAPPER FUTURE DOTES ON HIS AND JOIE CHAVIS' KID: 'MISSING HIM THE MOST'

RAPPER FUTURE DOTES ON HIS AND JOIE CHAVIS' KID: 'MISSING HIM THE MOST'