Home » NEWS » MICHELLE OBAMA TO GAYLE KING: ‘I AM SURPRISED MY KIDS HAVE FRIENDS’

MICHELLE OBAMA TO GAYLE KING: ‘I AM SURPRISED MY KIDS HAVE FRIENDS’ 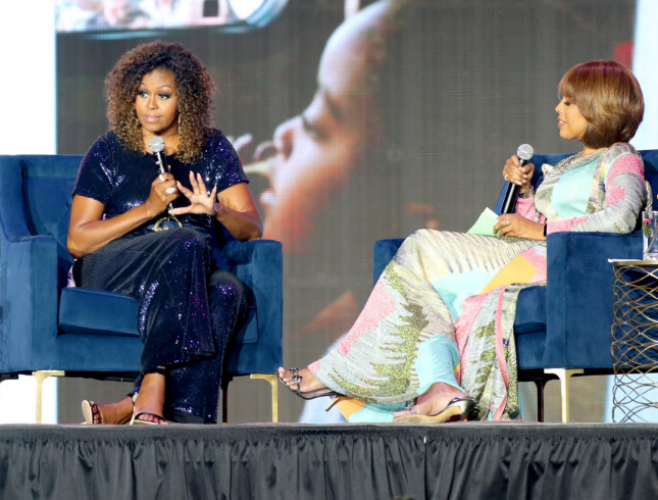 Michelle Obama is surprised that her daughters, Sasha and Malia Obama, have friends after eight years of living in the White House and having the Secret Service accompany them to every event. The former First Lady shared her rationale with Gayle King during the ESSENCE Festival this past weekend.

“‘Don’t lie, they’re not going to take them, they just need to know where they are. And, uh, thank you for having Malia and Sasha over. Oh, and by the way, there is going to be a man with a gun sitting outside all night. If you let him use the bathroom, that would be nice.'”

Still, even with the public notoriety and scrutiny along with high-security measures, Sasha and Malia turned out to be well-rounded young adults. “I credit my own upbringing,” Michelle said. “I credit my mother,” she added. “She was in the house with us. Anyone who met Marian Robinson knows she’s not impressed with anything,” Mrs. Obama joked. “Our focus was to make sure the girls did what they were supposed to do,” she concluded.

So how is life for Michelle and Barack Obama after the White House and as empty-nesters? “We are reconnecting, but the journey of marriage for all of you young people, just remember you go through phases,” the former First Lady advised. “But if you can hang in there through the bad times, you get to the point where you look at the dark clouds, and you see your baby and you say, ‘I see you boo,’ that’s where me and Barack are.”

You can read Michelle Obama’s life story in her book, Becoming, which is available on Amazon and in bookstores nationwide. Stay tuned for more celebrity family news!

TREY SONGZ REVEALS SON'S BIRTHDAY, SAYS BABY'S MAMA IS NONE OF YOUR BUSINESS

TREY SONGZ REVEALS SON'S BIRTHDAY, SAYS BABY'S MAMA IS NONE OF YOUR BUSINESS