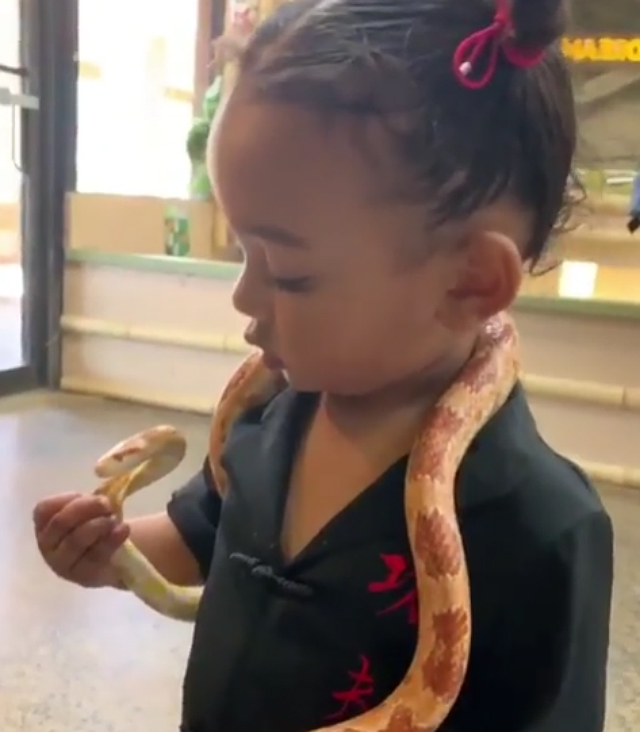 Kim Kardashian is receiving serious backlash for letting her youngest daughter, Chicago West, handle a snake during the family’s recent vacation in the Bahamas. For the most part, critics are not so concerned about Chicago’s safety but rather that of the well-being of the snake.

In the video clip, Chicago West has a snake wrapped around her neck. At one point, the little one snatches the creature back so that she can get a better look at the snake’s face. Chicago continues to snatch the snake back every time the aminal attempts to escape. The little one’s rough handling of the snake is what set animal lovers off.

“She is holding the snake way too tight,” one critic said. “The poor snake needs to be able to move around she could have hurt it.” Another follower wrote, “No one is going to talk about the fact that this is an animal, not a toy? I’m impressed about stupidness (sic) nowadays.”

Watching Chicago West snatch the snake back to look the creature in the eye caused one fan to deem all of the Kardashians as cruel. “The Kardashians have always been cruel towards animals specifically Kim who continued to wear fur and snakeskin publicly,” the critic said. “Truly [disgusting] especially when you have such a huge platform.”

‪Bahamas 🇧🇸 Pics Coming Up! I thought taking a pic with three kids was hard OMG this is almost impossible! ‬

Regardless of the backlash, Kim Kardashian was every bit proud of her daughter for fearlessly interacting with the snake. “My brave girl, Chicago,” the KUWTK star captioned underneath the clip. Stay tuned for more Keeping Up With The Kardashians baby news!