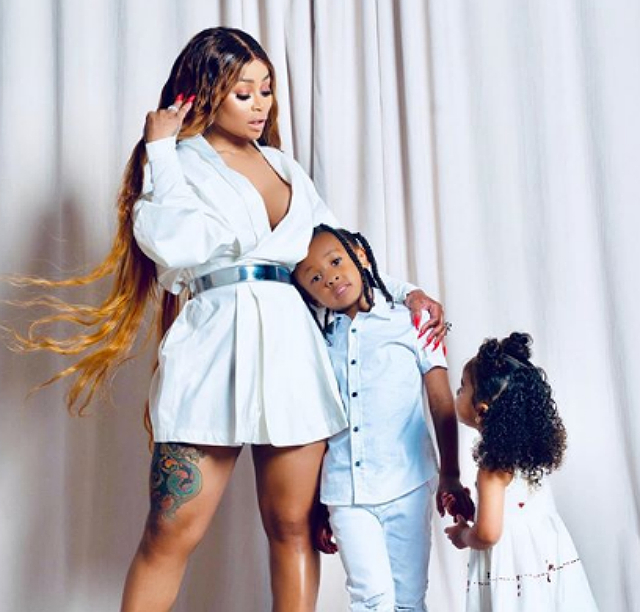 Blac Chyna’s kids, Dream Kardashian and King Cairo, are about that modeling life. The Reality TV star recently uploaded pictures of her with her kids during a recent photoshoot.

“La Familia,” Chyna captioned underneath a candid that showed her with King and Dream. “Your beautiful family,” one fan wrote online after seeing the pictures. Another of Blac Chyna’s Instagram followers wrote, “Beautiful.” Aren’t they cute?

Blac Chyna has been in the media these past few months because of her relationship with her children’s fathers. It was just a few weeks ago that the Reality TV star took to Instagram to express disappointment in her daughter’s father, Rob Kardashian, sharing his desire to have his daughter excluded from Chyna’s reality series, The Real Blac Chyna, through his legal team.

“It is very unfortunate that Rob could not simply have an adult conversation with me,” Blac Chyna shared in response to court documents. “Had Rob contacted me directly rather than through his attorney, Marty Singer, Rob would have learned about Dream’s participation in the show,” the celebrity mom concluded.

Still, even with a few bumps in the road, Rob Kardashian and Blac Chyna make co-parenting work. “He’s in a good place right now. He’s happy, he’s getting healthier, and he’s just really settled into his role as a parent,” an inside source recently revealed about Rob. “That’s his priority and that’s what’s really giving him purpose right now,” the family friend said.

What will Blac Chyna and her kids share with their social media fans next? We will have to keep watching this celebrity mom and her little ones to find out!