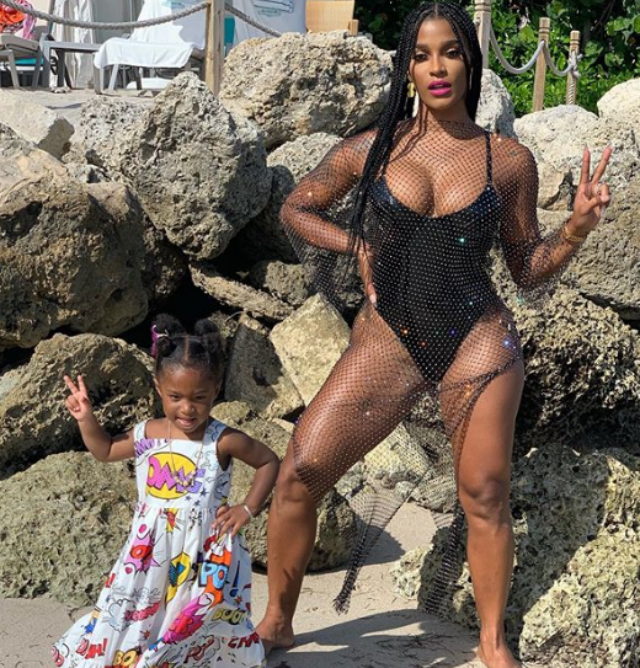 Joseline Hernandez has reunited with her daughter, Bonnie Bella, after the child’s father, Stevie J, enjoyed a few days of sole custody. The celebrity mom shared a series of pictures on Instagram to celebrate her daughter returning home.

“Puerto Rican Princess,” Joseline captioned underneath one candid of her and Bonnie Bella giving fans a pose along with the peace sign while spending the day at Fisher Island Beach in Miami Beach, Florida. Bonnie wore a beautiful dress fit for summer while Joseline wore a black bathing suit.

Joseline Hernandez was separated from her daughter for nearly two weeks after a judge granted Stevie J temporary sole custody of Bonnie Bella earlier this month. The ruling came as a form of punishment after the judge believed that Joseline ignored a court order, which gave Stevie J visitation rights.

Stevie told the courts that his daughter’s mother took their daughter to Los Angeles and then back to Florida in efforts to prevent him from spending quality time with Bonnie Bella. Joseline later revealed that a scheduling conflict caused the confusion. The judge, however, did not see things that way.

'RHOA' STAR PORSHA WILLIAMS ON HAVING MORE KIDS WITH DENNIS MCKINLEY: 'I GOT ONE MORE IN ME'

MADONNA CELEBRATES HER BIRTHDAY WITH HER CHILDREN

MADONNA CELEBRATES HER BIRTHDAY WITH HER CHILDREN