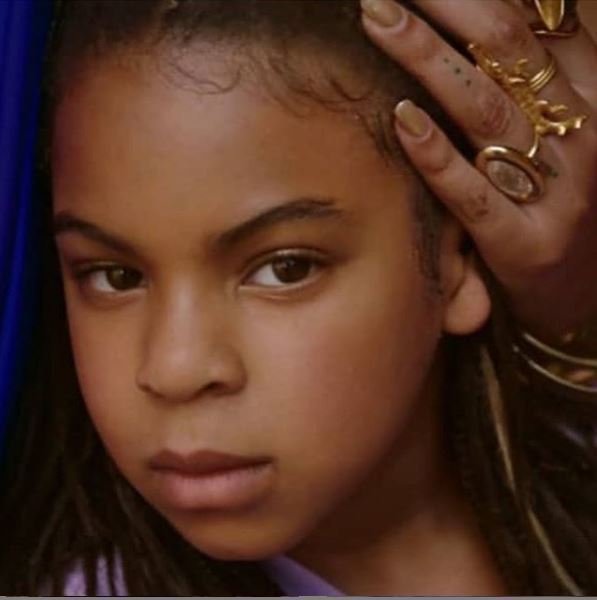 If your name is Blue Ivy Carter, then you are definitely having the best 2019 yet. Recently, Billboard announced that the elementary school princess earned her first Billboard Hot 100 entry with “Brown Skin Girl.”

Blue Ivy is number 77 on the chart. “Brown Skin Girl,” a love letter to all of the “brown-skinned girls” around the world  also features Wizkid and SAINt JHN.

Since the release of “Brown Skin Girl,” #BrownSkinGirlChallenge has been trending worldwide, encouraging women young and old to celebrate, embrace, and show-off their beautiful brown skin.

Let’s not forget, this isn’t the first time that Blue Ivy hit the Billboard charts. In 2012, earned the title as the youngest artist in history to ever enter the charts as a result of her appearance on her father’s track, “Glory.”

In addition to having her own song on her mother’s new project, Blue Ivy was also featured in Beyonce’s video for the song “Spirit”.

“Spirit” was executive produced by the Queen herself. And of course, the internet believes that seven-year-old Blue Ivy was the true star of it all. Take a look at some of the comments that flooded the internet about the young princesses appearance.

Everyone saw Blue Ivy’s music video, right? Her mom made a cameo in it.#SpiritMusicVideo pic.twitter.com/440VNnh4gW

Beyonce has dropped the #SpiritMusicVideo I love that Blue Ivy was included. Great way to connect to Mufasa and Simba #upwith6 pic.twitter.com/x3rQxTlQrB

In a recent interview on Good Morning America, Beyonce called the project “A love letter to Africa.”

If you haven’t seen the video for “Spirit,” don’t fret, we have it right here. Check it out and let us know what you think. Do you agree that Blue Ivy stole the show? We cannot wait to see what the future holds for this amazing young lady! With the way things are shaping up for this young rising star, we have a feeling that soon, we won’t be seeing her featured on anyone else’s music other than her own. Blue Ivy Carter is definitely on the right path to make a name for herself outside that of her famous parents and we cannot wait to watch the journey.

SHAQIR O'NEAL'S YOUNGEST SON, SHAQUIR IS MAKING A NAME FOR HIMSELF ON THE COURT

SHAQIR O'NEAL'S YOUNGEST SON, SHAQUIR IS MAKING A NAME FOR HIMSELF ON THE COURT