"LeBron Is Making A Spectacle Of Himself" 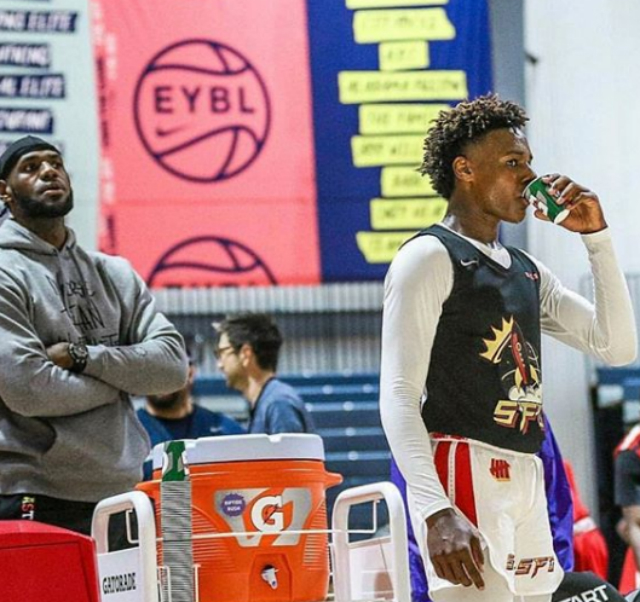 LeBron James is getting loads of support from fathers throughout the country after Jason Whitlock of FOX Sports saw the need to scrutinize the Los Angeles Lakers player for celebrating his son, LeBron James Jr., at the teen’s AAU tournament in Las Vegas.

LeBron did a few dunks on the court before the competition began. The celebrity father jumped around every time his son scored during the game. James even lost his shoe at one point after watching his son execute the perfect play. Many in attendance at the AAU tournament thought LeBron James’ behavior was hilarious. Some even cheered the star athlete on as he celebrated his son. Jason Whitlock, however, had a problem with LeBron’s behavior.

Today’s Before We Go: LeBron should take the advice he gave his mother… sit yo ass down. @WhitlockJason pic.twitter.com/77DDCrD9ql

“LeBron is making a spectacle of himself, a circus of his son’s early playing days and using his son’s game as yet another platform to build a LeBron social media brand,” the Sports analyst said. Whitlock even went so far as to compare LeBron James to LaVar Ball who is also a proud father whose sons play basketball.

I usually defend Lebron. And I gotta be honest if my son is ever throwing down alley hoops I will probably lose my f*cking mind. But this is absolutely ridiculous. This is like, bizarre childlike behavior. Whatta weirdo pic.twitter.com/9AcNqLfxao

LeBron James’ behavior at the AAU tournament may have been unconventional. Bronny’s career as a rising star thus far, however, is anything but ordinary. At just 14-years-old, LeBron James Jr. already has college scouts looking his way. The youngster appears to be headed towards the NBA, which is a dream of his father’s who longs to play alongside his son one day.

In any case, LeBron James Sr. had a lot of support after the scrutiny that Jason Whitlock and other critics put into the atmosphere. Jayson Tatum of the Boston Celtics particularly said, “With so many fathers not supporting their kids we get upset because he is genuinely happy for his son! Lol that’s crazy I can’t wait till my son gets older and I get to support him with whatever he wants to do!”

Bronny dunks it to seal the [email protected] @tiphoops pic.twitter.com/c8Cg8i6YKz

With so many fathers not supporting there kids we get upset because he is genuinely happy for his son! Lol that’s crazy I can’t wait till my son get older and I get to support him with whatever he wants to do! https://t.co/pUCZOlZreD

LeBron James Jr. celebrates his fifteenth birthday in October, which is just ahead of his first season of high school basketball at Sierra Canyon School in Los Angeles. Stay tuned for more celebrity family news!