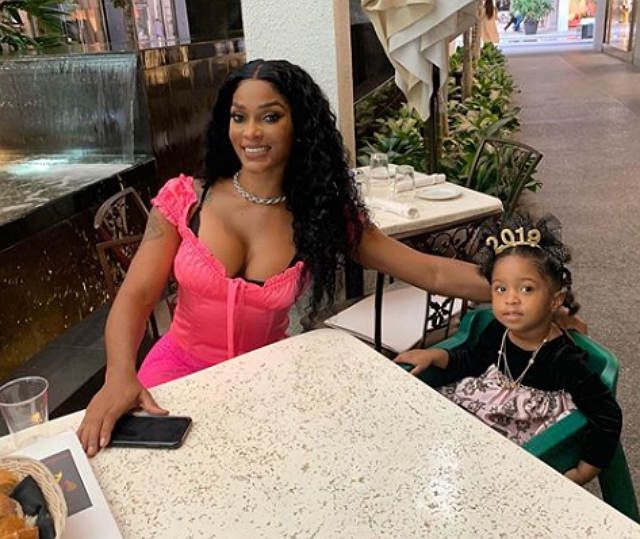 Joseline Hernandez says that she never kept her daughter, Bonnie Bella, away from her father, Stevie J. The former Love and Hip Hop star is reportedly countersuing her child’s father for an increase in child support payments.

“Joseline said Stevie should be paying more child support instead of trying to ‘take the child from the only home the child has known.’

Joseline said she’s complied with the terms of their current custody order and has never kept their daughter Bonnie Bella away from Stevie. And she denied moving to Miami to shack up with another guy.

Joseline called out her baby daddy for mom-shaming her and called his suit a ‘frivolous action to try to take the child from the only home the child has known.'”

I remember before you were born I had backlash from anyone that could talk….. Now look at you! Now everyone wants a piece of you! No one was there for you or Mommy! But we made it! Tell them like I tell them You all #Mines Wearing her favorite @childsplayclothing 🌸🌸🌸🌸

Stevie J filed court documents a few weeks ago, which accused Joseline Hernandez of standing in the way of him spending quality time with their daughter. The producer alleged that his daughter’s mom committed “parental alienation” when she moved to Miami with Bonnie Bella. All of the legal drama between Stevie J and Joseline regarding custody and visitation rights ensued after the celebrity mom shared pictures of Bonnie Bella and Joseline’s partner, DJ Ballistic, bonding.

Had to get my #offwhiteairforce1 from @apptonlygallery and thank you @philthemayor for finding them for me!

Hernandez deemed Bonnie as a “daddy’s girl” in reference to the little one’s relationship with Ballistic. Stevie came to take his daughter out for “daddy and me” time after the pictures went viral only to learn that Joseline would not allow the trip. Stevie told his Instagram fans that his child’s mother often prevents him from spending time with his daughter. Joseline, however, claimed that such an accusation was false.