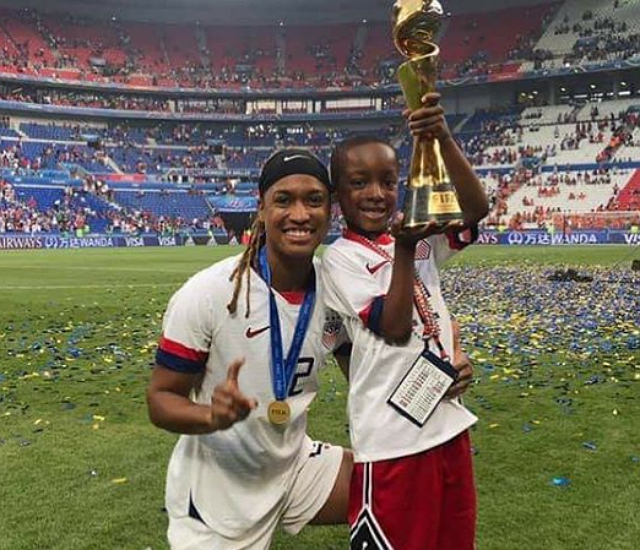 Jessica McDonald celebrated the USA women’s soccer team’s World Cup victory with her son, Jeremiah, this past weekend. The celebrity mom brought her 7-year-old on the field to commemorate the United States’ win over the Netherlands on Sunday (July 7).

“We did it, Bud,” Jessica shared along with a picture that showed her son showering his mom with confetti while on the field. McDonald is the only mom on the USA women’s soccer team and highly admired by her teammates for her strong devotion to both her team and son.

“Her ability to balance life is just incredible and I think, hopefully, going forward more women choose her route and not feel like they have to choose their career over having a family,” teammate Crystal Dunn told the Associated Press after the women’s soccer team’s win on Sunday. “I think the new generation is going to feel like they have the option of doing both,” the star athlete added.

Jessica McDonald has been vocal about the gender disparities in professional sports that sometimes forces women to choose between family and career. The celebrity mom recently told The Oregonian that something as simple as childcare would help women athletes better juggle parenting with practice times.

“If anything as simple as childcare was covered by the league or your organization, that would be life-changing for moms, especially when we’re scraping pennies,” McDonald shared. “Maybe we would have more moms in this league if something like that was there for us, but I feel like we’re far from that,” she admitted. ”

The situation is way different for us than it is for male athletes and it would be nice to have better support from our league in that area.”

Does Jeremiah understand just how big of a deal his mom and her teammates are, right now? “He doesn’t fully understand, but at last he’s at an age right now where he’s actually going to remember this,” McDonald told the press.

The USA women’s soccer team made history this past Sunday with back-to-back championships. The team will be honored with a ticker tape parade in New York City.