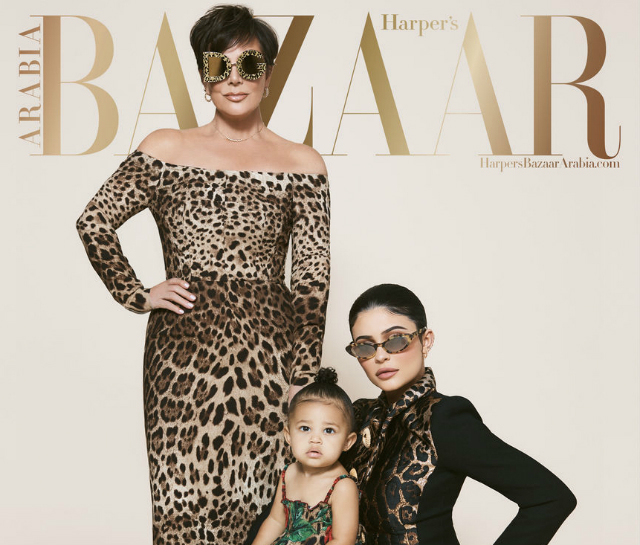 This is turning out to be a monumental year for Stormi Webster. Kylie Jenner’s baby celebrated her first birthday in February, and now little Stormi is featured on the cover of Harper’s Bazaar: Arabia. Did we mention that this is Stormi Webster’s first magazine cover? Well, it is!

i got it from my mama 🖤 @harpersbazaararabia

Of course, Stormi is in good company in the photos. The little one’s mom and her Stormi’s grandmother, Kris Jenner, are also on the cover. Coolness appears to be the look that the adults are going for in the shots. Both Kylie and Kris rock sunglasses in the pictures. “Here’s to STRONG WOMEN,” Kylie shared along with a candid from her Harper’s Bazaar: Arabia photo shoot with Stormi and Kris. “May we know them, may we be them, may we raise them,” the celebrity mom concluded.

Kylie shared the manner in which parenthood has helped her understand her mother on a different level. “When I became a mother, my perspective on life completely changed, and so did how I look at my own mom and appreciate all the things that she’s done for me,” Kylie explained. “Now I can understand the way that she feels about me, the way that she loves me, and how strong her love is for all her kids, because of how obsessed I am with Stormi.”

Kris Jenner is certainly obsessed with her daughter. “We’ve always been very connected emotionally and spiritually and have this incredibly strong bond,” Kris said of her and Kylie Jenner’s relationship. “But I think as we both get older, our relationship shifts a bit. And for me, I just want her to know that I’m always here to guide her and help her with whatever she needs.”

i never thought much about a mother’s love until i became one myself. there’s no words strong enough to tell you how much i love you and how blessed i am to have you in my life ♥️🖤 @harpersbazaararabia

Stormi Webster is Kylie Jenner’s daughter with rapper Travis Scott. Stay tuned for more Keeping Up With The Kardashians news!

DANIELLE BROOKS AND BOYFRIEND ARE EXPECTING THEIR FIRST CHILD TOGETHER

DANIELLE BROOKS AND BOYFRIEND ARE EXPECTING THEIR FIRST CHILD TOGETHER