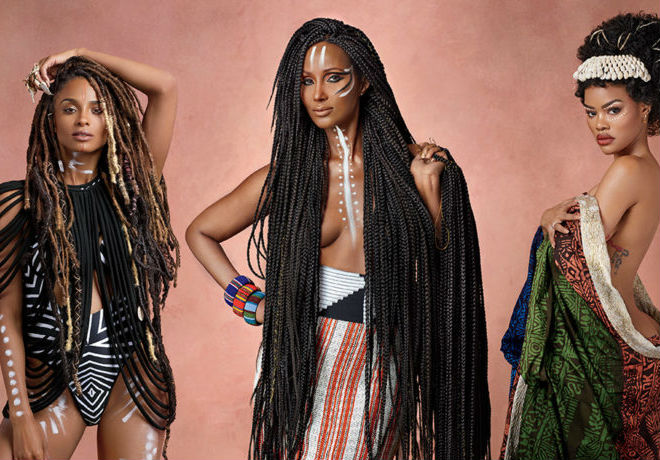 Ciara, Teyana Taylor, and Iman cover the July/August issue of Essence magazine. Inside the publication, the mommy moguls open up about how they balance motherhood and their careers. Check out highlights below and head to Essence for more!

Teyana Taylor is a hard-working mom. In just a few years since welcoming her daughter in 2015, the singer has   launched several ventures, including a nail salon, a fitness program, and an all-female production company. She also released her second studio album, K.T.S.E, last year.

Taylor credits her daughter, Iman Tayla Shumpert Jr., affectionately known as Junie, for inspiring her to become her own boss.

“Being a mom makes you move differently, think differently and speak differently,” Taylor says. “Once I had Junie, I realized I was living for so much more.”

She adds of 3-year-old Junie, “I’m just teaching her early: ‘You are beautiful, you are smart, you are magic,’ ” she says. Through her her marriage to NBA player Iman Shumpert, Teyana also hopes to impart the message of love and commitment. “Love is important,” she says.

Ciara released her seventh studio album, Beauty Marks, on May 10, 2019, under her own record and entertainment company, Beauty Marks Entertainment (BME). The mom of two says she is just getting started and believes that “no matter how much success you have, I believe there’s always an opportunity to grow and learn something new”.

In 2016, Ciara married Seattle Seahawks quarterback Russell Wilson and the couple welcomed their daughter, Sienna Princess Wilson, on April 29, 2017. The singer was already a mom before she met Wilson when she gave birth to her son, Future Zahir Wilburn, in 2014.

EVELYN LOZADA SPEAKS ON CARL CRAWFORD, HER KIDS, AND MORE

RAVEN SYMONE WANTS TO HAVE KIDS VERY SOON: 'IT'S DEFINITELY IN MY FUTURE'

RAVEN SYMONE WANTS TO HAVE KIDS VERY SOON: 'IT'S DEFINITELY IN MY FUTURE'