"Someone She Can Always Count On" 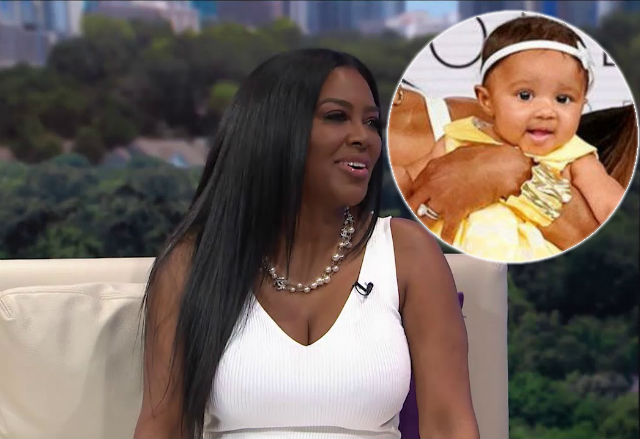 Kenya Moore’s baby, Brooklyn Daly, is giving us all of the cuteness. The little one was recently filmed while visiting the doctor’s office. Baby Brooklyn was excited even while waiting for her examination.

The little one moved around on her stomach while waiting in the exam room. “Are you ready for your shots,” Kenya asked her daughter. At one point, it looked like Brooklyn answered her mom in the affirmative. The little one was definitely happier that most kids who dread the doctor’s office because of immunization shots.

Kenya Moore delved into feelings of depression that took her by surprise when she was pregnant during her recent talk with the ladies of Sister Circle.

“When I was pregnant, I didn’t realize that I would actually go through depression,” Kenya shared. “I think in the beginning, I thought, ‘I finally got everything that I wanted.’ Here I am. The baby is kind of out of the zone where they say it’s not safe or may not survive. And I thought, ‘I should be happy. I should be like, celebrating every day and just having so much fun being a great pregnant woman.’ And I was so depressed at first. I never expected that. I never saw that coming.”

@thebrooklyndaly is having a tough time teething but she’s all smiles here after getting her shots and ears pierced yesterday. Gold earrings won the poll but daddy wanted silver so what daddy wants daddy gets 👶🏽👦🏽

Of course, Moore understands that what she was feeling was nothing more than the effects of hormonal imbalance. “Many women go through [that stage],” she admitted. “I just didn’t know that it would actually happen to me because I’m thinking, ‘I finally got what I wanted.’ And now, after 46 years, [I thought] that it would be different for me. But it wasn’t.”

“[I’m going to] give her the love, affection, and the wings to grow and be whomever she wants to be in her life. Just being a real friend, mother, and someone who really cares. [I want to be] someone she can always count on.”