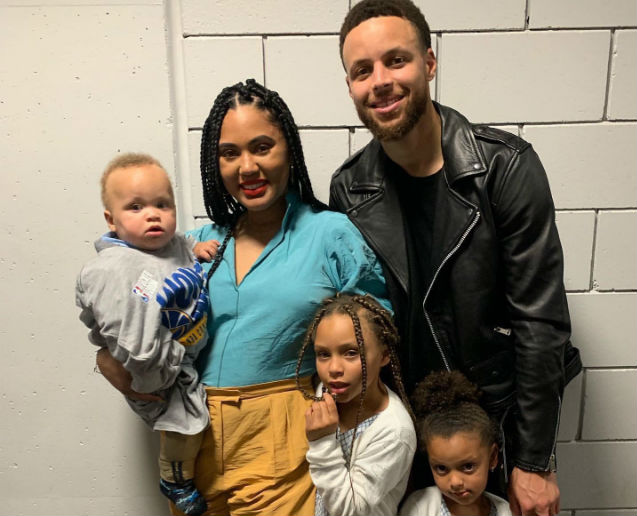 Stephen Curry a.k.a Steph Curry had the support of his wife, Ayesha Curry, and kids at the Western Conference finale. The game went into overtime as the Golden State Warriors emerged as the victors over the Portland Trail Blazers this past Monday.

Steph Curry was described as a player who was unleashed during the game as he earned 16.5 points for his team while delivering 11.8 rebounds and 8.8 assists. In the end, the Warriors beat out the Trail Blazers with a 119-117 final score. The game did not end without going into overtime, which led to even more excitement.

Still, with all of the hype surround Steph Curry and his team, little compared to the attention that little Cannon Curry received on the sidelines. Everyone from Colin Kaepernick to the Warriors’ coaches stopped by to see how the youngest member of the Curry family was getting along at the big game.

The Warriors’ success at the Western Conference puts the team in line for another NBA Championship. “We still don’t take anything for granted,” Steph said after Monday night’s competition. “We understand how hard it is to end at this level. We don’t want to end as long as we can control it.”

Golden State Warriors Coach Steve Kerr would agree that now is not the time to relax and coast. “I just can’t say enough about the competitive desire about the group of players that we have here and the culture that they have built together,” the coach shared after Monday night’s win. “Being without Kevin [Durant] these last five games has put us in a really tough spot, and our guys stepped up in a big way.”

As of now, it seems that the Golden State Warriors will either face the Toronto Raptors or the Milwaukee Bucks. Fans can count on Steph Curry’s family to support him every step of the way.

'TOY STORY 4' IS ALL ABOUT SAVING SPORKY

'TOY STORY 4' IS ALL ABOUT SAVING SPORKY