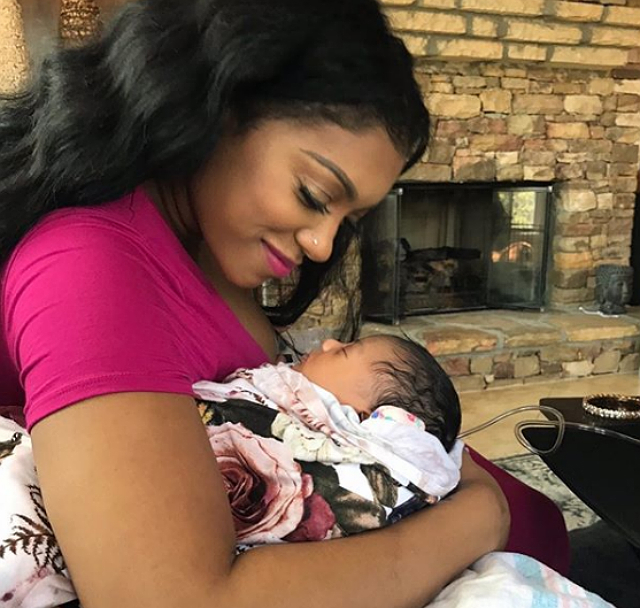 A mother’s work is never done! Porsha Williams uploaded video clips of her baby girl, Pilar Jhena McKinley, while she was giving the little one a bath and during Pilar’s nap time this past weekend. The youngster held the camera’s attention with a gaze that told viewers that she was the center of attention in the footage.

One clip of Pilar showed her enjoying a bath as her mom filmed the experience. Porsha acknowledged that her daughter seemed to love the water and everything else that comes with a bath. “Say, ‘I’m loving bath time,'” the Real Housewives of Atlanta star said while capturing footage of baby PJ taking it all in.

Another clip showed Pilar resting in her crib. The little one was wide awake while in bed. “Oh my god,” Porsha said through laughter. “She is looking dead at the camera.” Little PJ gave her mom a slight smile during the clip that had fans over the moon with the infant’s cuteness.

Fans of Real Housewives of Atlanta have watched Porsha Williams’ development over the years. The Reality TV star has effectively gone from a stay-at-home housewife to a working mom who is planning to get married to her daughter’s father, Dennis McKinley, later this year.

Porsha gave off nothing but positive vibes when recently asked about the possibility of a friendship with Kenya Moore if the former housewife were to return to the series. In fact, Porsha thought that it would be good for baby PJ to have a playdate with baby Brooklyn Daly.

“I’m so busy just getting used to being a new mom,” Porsha said of her current schedule. “[Kenya’s] really busy because she’s back to work with her new baby and just life itself,” the RHOA star added. “If we could just take a moment and get the kids together, I think it would great for the audience to see.”

A playdate may not be as far-fetched as some would imagine as Porsha and Kenya have been cultivating a relationship behind-the-scenes. “We’ve been bonding over being new moms,” Williams shared. “I don’t even think about the past and how our relationship used to be because I’ve let that go. And I think she’s let that go. I support her, and she’s been supporting me, and it just works.”

Porsha Williams and her fiance, Dennis McKinley, welcomed their daughter in March. The couple is set to get married on New Year’s Eve 2019. Stay tuned for more Real Housewives of Atlanta baby news!