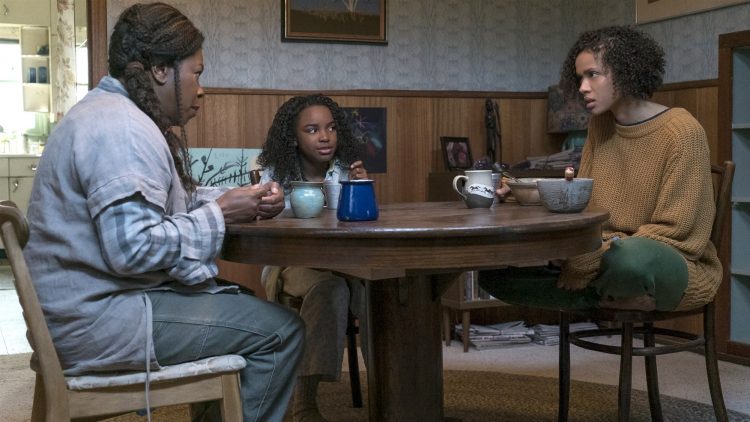 Saniyya Sidney has had an incredible few years in Hollywood and it doesn’t seem like her star will dull anytime soon. This extraordinarily talented young rising star not only has appeared alongside A-listers like Denzel Washington in Fences and Taraji P. Henson in Hidden Figures, she has also appeared in American Horror Story, and most recently her own television series—The Passage.

Well, Sidney has a new project that hits theaters today and it promises to be another blockbuster for the young star. as it will also star Gugu Mbatha-Raw, David Strathairn, Lorraine Toussaint, among others. Fast Colors, directed by Julia Hart, chronicles the story of Ruth, who is forced to go on the run when her superhuman abilities are discovered. The film, which premiered at the 2018 SXSW Film Festival is definitely the example of multi-generational #blackgirlmagic. If you haven’t checked out the official trailer, take a sneak-peek below and let us know what you think. This new movie is definitely a nod to the fact that black girls rock even more as superheroes!

Thriveglobal.com had the opportunity to sit down with Sidney and find out a lot more about this talented young lady. Take a look at a snippet of what she had to say below. To read the interview in its entirety, click here.

Thank you so much for doing this with us! Can you tell us the story of how you grew up?

My home if full of love. Our family is extremely close. We support each other’s dreams and believe that it is important to let each other know that we care. With that love and support, you also are expected to give 100% in everything you do. Whatever gift you have been given by God is a gift that can’t be wasted.

Can you share a story about what brought you to this specific career path?

I’ve always known I wanted to be an actor. I watched tv and would memorize the roles of my favorite shows and then would act them out for my parents. When I was around 4 I began telling my parents I wanted to be on the shows. My mother saw me re-enact an entire scene from one of my shows by memory and told my dad we should explore this talent some more. So a week after my fifth birthday I began my first class. And I haven’t stopped working on my craft since.

Can you tell us the most interesting story that happened to you since you began your career?

Ever since I was tiny, I watched the Oscars and dreamed of going. When I found out “Fences” and “Hidden Figures” both got nominated I just screamed. My first Oscars I got to go for two movies!!! I cannot wait to go back again!

Can you share a story about the funniest mistake you made when you were first starting? Can you tell us what lesson you learned from that?

I learned not to judge from an audition if you booked the job or not. I really wanted to be in a comedy and I had a directors session to play Kevin Hart’s daughter. I wanted this role very badly. I didn’t even get through the entire scene when the director said “thank you!” and I left. He didn’t even give me direction. My dad walked me out and could barely get me to the car when I started crying so hard. I knew I didn’t get it. Before we even made it to the freeway, my manager called and said I booked it! It taught me to always just stay focused on the work, and the rest always works out some way in your favor. By the way, that movie just released on Netflix “Kevin Hart’s Guide to Black History!

What are some of the most interesting or exciting projects you are working on now?

My wonderful series “The Passage.” I play Amy Bellafonte. It’s been a role I will love the rest of my life. The show is filled with scary viral creatures, scientific experiments & the end of the world. At its heart is the relationship between a girl who has no father & a man who lost his daughter. Amy is courageous, funny & always puts loyalty before fear. I also have a great movie called “Fast Color” coming out in March. Incredible all women leads & directed by Julia Hart.

I’m very interested in diversity in the entertainment industry. Can you share three reasons with our readers about why you think it’s important to have diversity represented in film and television? How can that potentially affect our culture?

It’s a must because every child needs to feel represented in storytelling. I’ve been trained to believe the point of being an actress is to create a connection with the audience. Meaning EVERYONE in the audience. When a person feels included or heard it helps them have more compassion to also want to help others to feel the same. We should feel curious and excited to learn about someone different than ourselves. As actors, we are given the opportunity to lead by example for inclusion in the stories we choose to tell. I never look at my characters as a color. I try and figure out what kind of person they are and want to help the audience feel everything about that character through my acting.

From your personal experience, can you recommend three things the community/society/the industry can do help address some of the diversity issues in the entertainment business?

My series “The Passage” was taken from a very popular novel written by the amazing Justin Cronin. My character, Amy, in the book is white with red hair and freckles. But when I auditioned, FOX & Justin knew I was their Amy. I was hired months before anyone else. They said they knew the second I walked in the door I was born to play this role.

So from my experience, I hope writers, producers, casting directors will cast roles with the heart of the character in mind, not the skin color. Go further to be more inclusive with all who work behind the scenes. Do more bio pics of great people who come from a culture or situation we haven’t seen before.

What are your “5 things I wish someone told me when I first started” and why. Please share a story or example for each.

1. Acting isn’t a destination it’s a journey. Denzel Washington told me to always “Seek the Truth.” Finding the truth is endless. Which means you’re always learning.

2. Trust the timing. There have been jobs I have been up for, I really wanted at the time, but I didn’t get. Had I booked them, I would not have been available for an even more meaningful role that was on its way.

3. Your purpose is connected to your passion. Find the thing you love, I mean really love. That you can’t help but always push yourself to be better at it.

4. Doubt and dreams can’t ride together. Each will take down the other.

5. Be grateful and humble. To all who support you, your parents, friends, and team. An actor has never become successful alone and has to always remember that this can end at any moment, so have fun.