ROBIN GIVENS’ SON ‘MICHAEL BILLY’ JENSEN IS ALL GROWN UP 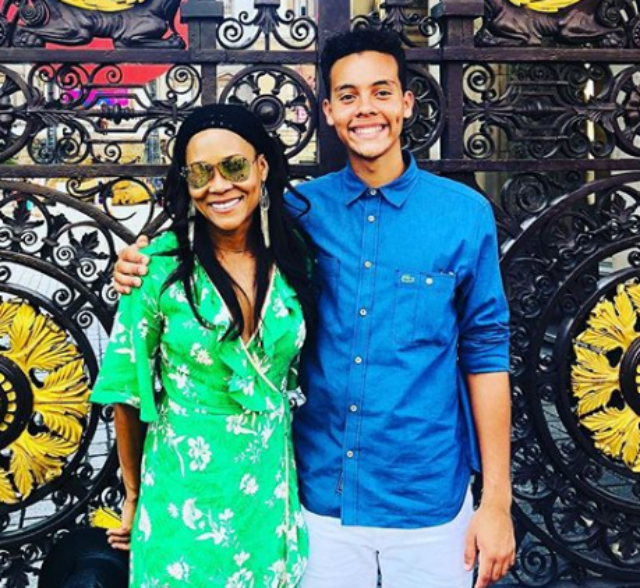 Where has the time gone? Robin Givens is college hunting with her son, William Givens Jensen, and it seems like just yesterday that the celebrity mom welcomed her youngest child.

Givens shared pictures of her with her son earlier this year that showed William towering over his mom while smiling from ear to ear. One shot was of Robin and William searching for colleges in Santa Cruz, California. “College hunting with my baby,” Givens told her Instagram fans. “Wow,” the celebrity mom continued. “Time goes by fast.”

Robin Givens recently took on another onscreen role as town lawyer in the hit television series Riverdale. While many television lovers are dialed into the series, Givens kids are not up on all of the happenings in the fictitious town.

“My kids play tennis,” Robin revealed during a recent interview with E! News. “[My son] works for this tennis company, and he calls me up, and he goes, ‘Mom, everybody at work is saying you’re the mayor. And I’m trying to tell them you’re not in politics. You’re an actor.’ He had no clue.”

Robin Givens was originally cast as the mayor of Riverdale last year. The onscreen character has since moved on to bigger and better things as the town’s lawyer.

“People love this show,” Given revealed during an interview with Access Hollywood. “I think part of the magic [is that] all of those kids [portraying parts onscreen] are so fabulous and such good friends, and I think it just adds to something. It’s really good.”

Riverdale gets its roots from the classic comic book series, Archie. Catch the series every week on the CW!

'A CHARLIE BROWN CHRISTMAS' WILL AIR THIS THURSDAY

'A CHARLIE BROWN CHRISTMAS' WILL AIR THIS THURSDAY