IS ‘A CHARLIE BROWN THANKSGIVING’ RACIST? 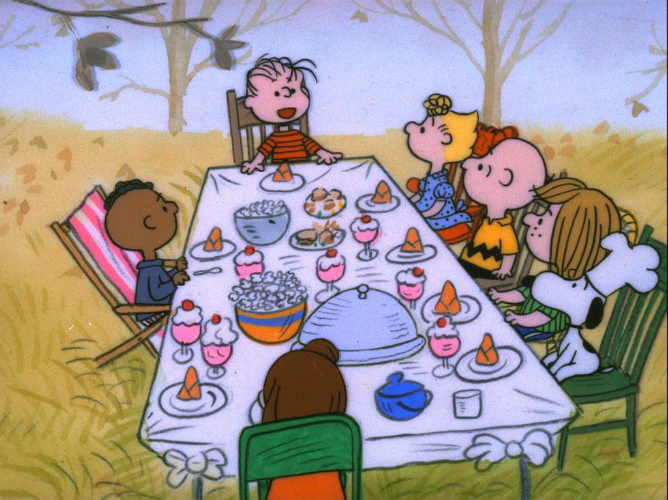 Charlie Brown as racist? Some people are answering that question in the affirmative after taking another look at A Charlie Brown Thanksgiving.

We're so thankful for family time! A Charlie Brown Thanksgiving is on tonight at 8|7c on ABC! pic.twitter.com/5C7fcld5Ys

The problem with Charlie Brown, according to the critics, comes in the form of the main character’s Black friend, Franklin. A snapshot of the segment where everyone sits down to eat was recently captured and shared by ABC. The post caused quite the stir on Twitter as Franklin has one side of the table to himself while the other friends seem to bunch up on the other side of the table in the image.

“If y’all don’t think racism exist..check out Charlie Brown,” one online critic said of the shot shared by ABC. “So you mean to tell me, no one wanted to sit by the lil black kid and why they give him the worse chair….think about it.” Another critic wrote, “It is very much racist. Is this recent?”

Y'all just now seeing this? #BlackPeople have ALWAYS noticed this difference. Even the dog is smushed in with everybody else on the right side of the table. These folks ain't late, y'all just now paying attention. #CharlieBrown #Thanksgiving #Franklin #ForeverAlone pic.twitter.com/KyAHAKByOA

A Charlie Brown Thanksgiving is a classic cartoon film that usually airs in honor of the holidays. The movie made its debut in 1973, which was nearly ten years after the beloved A Charlie Brown Christmas aired for the first time.

While some remain firm in their belief of A Charlie Brown Thanksgiving spreading bigotry, a few media outlets have decided to poke a bit of fun at the controversy. In particular, The Root decided to fathom an interview with Charlie Brown’s Black friend to explore how Franklin, who has long been a forgotten character of the movie, would respond to the sudden interest.

“I am a forgotten trailblazer,” imaginary Franklin shares. “Without me, there couldn’t have been a Proud Family,” he continues. “Dora could have never explored if I hadn’t broken down that barrier. But then again, she made most of her money in the dope game.”

You can expect close monitoring and possible scrutiny of Charlie Brown should the youngster’s Christmas special air this year. Stay tuned for more viral news!