Allow Mrs. Obama To Reiterate What She Said About Donald Trump 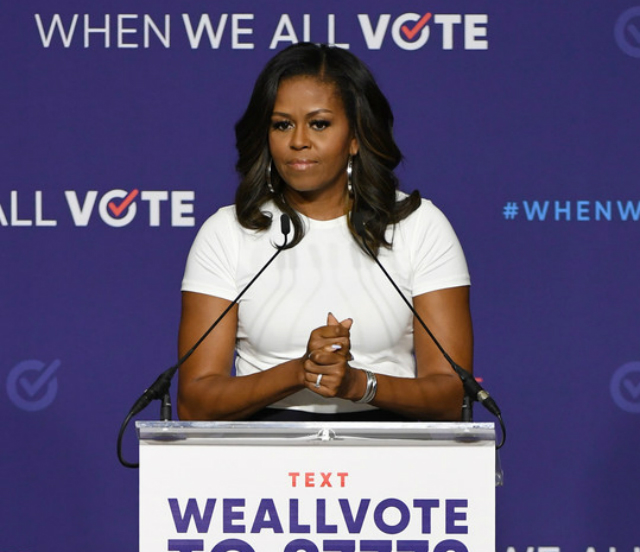 Michelle Obama’s memoir, Becoming, is less than 24 hours from its official release date. Avid readers have already purchased a copy and are enjoying the additional insight that Mrs. Obama provides via interviews on her forthcoming book. Michelle’s latest one-on-one was with Oprah Winfrey for ELLE’s newest magazine issue. Check out a snippet of what Mrs. Obama said about life, love, family, and politics below!

I'm living for Michelle Obama's honesty about race, motherhood, life as a First Lady. I can't wait to read her book. #MichelleObama

On her earlier marital issues with Barack Obama

“When you get married and have kids, your whole plan, once again, gets upended. Especially if you get married to somebody who has a career that swallows up everything, which is what politics is. Barack Obama taught me how to swerve. But his swerving sort of—you know, I’m flailing in the wind. And now I’ve got two kids, and I’m trying to hold everything down while he’s traveling back and forth from Washington or Springfield. He had this wonderful optimism about time. He thought there was way more of it than there really was. And he would fill it up constantly. He’s a plate spinner—plates on sticks, and it’s not exciting unless one’s about to fall. So there was work we had to do as a couple. Counseling we had to do to work through this stuff.”

Michelle Obama shares lesson she's learned during her 26-year marriage: 'My happiness was up to me' https://t.co/HKoRdXZvAm#ABC2020 #MichelleObama #Michelle pic.twitter.com/epPgc5l4ZX

Donald Trump and the birther conspiracy that endangered her family

“For [Trump] it was a game. But the threats that you face as the commander in chief are real. And your children are at risk. In order for my children to have a normal life, even though they had security, they were in the world in a way that we weren’t. To think that some crazed person might be ginned up to think my husband was a threat to the country’s security; and to know that my children, every day, had to go to a school, and soccer games, parties, and travel; to think that this person would not take into account that this was not a game—that’s something that I want the country to understand. I want the country to take this in, in a way I didn’t say out loud, but I am saying now. It was reckless, it put my family in danger, and it wasn’t true. And he knew it wasn’t true.”

Trump's false conspiracy theory that Pres. Obama, was not born in the U.S. was "crazy and mean-spirited," with its "bigotry and xenophobia hardly concealed," but these "loud and reckless innuendos" were also "deliberately meant to stir up the wingnuts and kooks." #MichelleObama pic.twitter.com/fxie11Vb01

Get the full scoop on Michelle Obama’s life in her book, Becoming, available on Amazon and bookstores nationwide tomorrow!

KENYA MOORE SHARES SNEAK PEEK PIC OF BABY BROOKLYN, SAYS SHE WON'T BE ABLE TO WALK FOR A FEW WEEKS