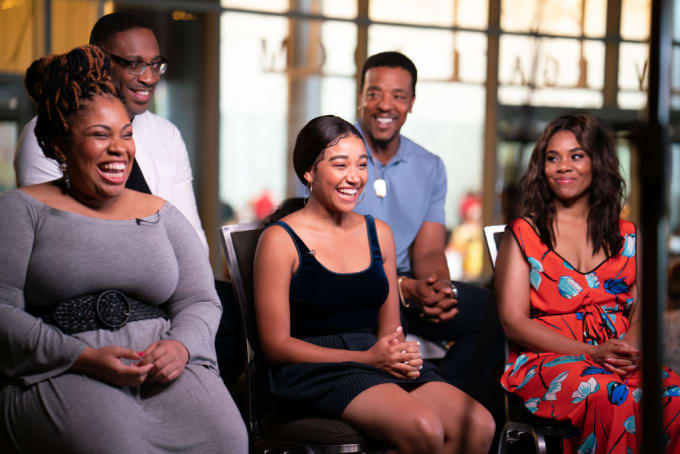 The Hate U Give, based on a novel by Angie Thomas, is poised to become this fall’s Hollywood blockbuster. Touching on racism and police brutality, the book as well as the movie, is just what America needs right now.
Recently, in addition to the cast and crew, lead actress Amandla Stenberg took a moment to let future movie-goers know exactly why they need to see this film.

Check out what the talented actress had to say below.

Stenberg on the depiction of Black life in film

“We so often get stories of black life rooted in pain, fear and struggle. Of course, that is a part of this story as well, but it’s also about all of the different facets of our interpersonal connections and relationships as black people, how we relate to and love our communities, [and] how we react to events and find our strength.”

Stenberg on her character Starr Carter

“Here’s a 16-year-old girl. She loves Nike. She listens to Kendrick Lamar. She’s loves Will Smith’s Fresh Prince and TLC. She loves Lebron. She lives in two different worlds, where in the white world, she acts white. But when she goes to a house party, she has to put on her black card.”

Stenberg on Starr’s struggle to assimilate in school

“Growing up in a lower income black community, I went to public school in elementary school and then when I was 10 – which is the same age as Starr was in the book – I started going to white private school. It was a huge switch up and I had to learn not only the culture of whiteness, but the culture of wealth and how to kind of present an image that would was relatable to these kids with whom I didn’t have that much to relate. I had to figure out how to constantly project an image that was not fully authentic to me,” said Stenberg, who grew up in a biracial family in Los Angeles. “My personal journey mirrors Starr’s in a myriad of ways.”
She continued, “I think that’s what so nuanced about Starr in finding who she is by the end of the story, she also realizes how all of these different facets of her are integral to who she is. By the end of the book, she’s about to turn 17. I was at a similar age when I realized that I didn’t need to make myself smaller, less loud, or less black in order to exist.”

The Hate U Give will hit theaters on October 19, 2018. If you haven’t seen it yet, check out the trailer below. Let us know if you plan on seeing what is truly positioned to become one of the most talked about movies of the year.

KHLOE KARDASHIAN: 'I HAD TO STOP BREASTFEEDING'