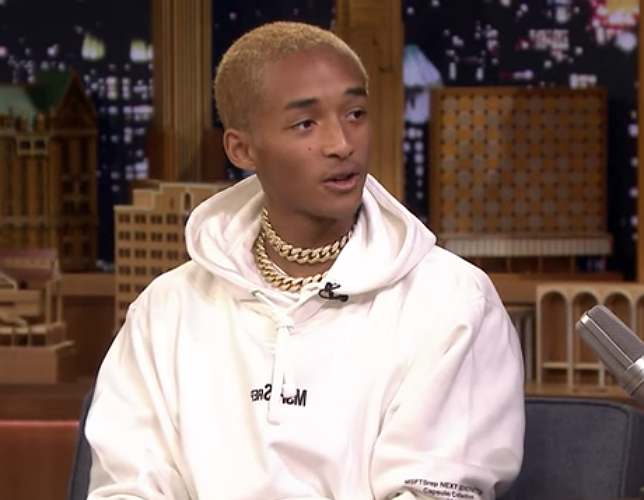 Jaden Smith was a show-stopper on The Tonight Show Starring Jimmy Fallon earlier this week. The young star performed his hit single, “ICON” from his latest album, SYRE.

Even though he’s been taking the stage by storm for years, Jaden admitted that performing on a solo tour still gives him the jitters. “I do get a little bit nervous sometimes,” the young star revealed. “When you’re opening up for somebody, you’re like, ‘If I mess up, you know, Justin’s going to come in and kill it. So I’m fine.’ But when it’s just me, it’s like, ‘Man! I really want to give people a show. I want to give my all onstage.”

Giving his all onstage requires diligence during the creative process. Surprisingly enough, Jaden prefers freestyling over writing every element of his songs down. “I like to piece it together, just like piece by piece, instead of just writing it down,” the young star explains. “I feel like if I write something down in my notebook I’m like, ‘Now I have to say this. I wrote it down. I can’t change it.’ When I don’t write it down it kind of gives me more freedom to go back [and] change lines.”

Jaden Smith’s “ICON” song garnered 100 million nods on Spotify back in February. The young star’s father, Will Smith, celebrated the accomplishment by crafting a parody for Jaden’s music video that was nothing short of hilarious. Check out Jaden Smith’s performance of his hit single on The Tonight Show Starring Jimmy Fallon below!

THANDIE NEWTON IS EXCITED ABOUT HER UPCOMING 'STAR WARS' ROLE: 'I HAVE A TOY AND EVERYTHING'