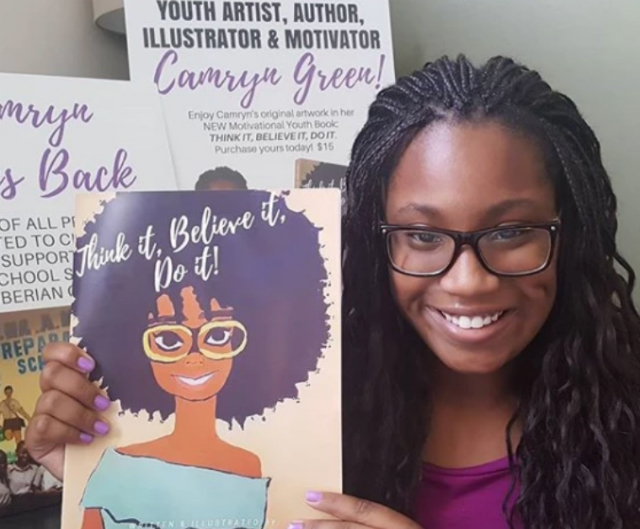 A philanthropist at 13-years-old? You’re talking about Camryn Green. This youngster isn’t even into the sweet spot of the teen years, yet she continues to make a spectacular impact in Liberia.

Camryn is both a writer and painter. the teen’s children’s book, Think It, Believe It, Do It is the inspirational story of a young girl who, through her challenges and triumphs, encourages readers to follow their dreams. Camryn began painting about four years ago and just recently started selling her creations.

“I always wanted to be an artist,” the teen tells media. “I’ve been painting since I was [4-years-old], although I’ve never taken any art classes. One day I just stopped the color-by-number painting, got out a canvas and painted freehand, and it actually looked pretty good.”

Camryn’s artwork was good enough to be sold online. She started turning profits of $20 to $100 per creation and moved to donate some of the money to charity.

“Some of it’s going into a college fund, some goes back into the business, and I also give back to the orphans in Liberia whose parents have died and they can’t afford to go to school,” the activist explains.

Camryn recently served as a speaker at the 38th annual Martin Luther King Jr. Interfaith Prayer Breakfast in Raleigh, North Carolina. She deemed the engagement as nothing short of an honor.

“It was such an honor to speak for such an important man,” the young philanthropist says. “If he was alive, I hope he would be proud of me. It was life-changing. Everyone at school was like, ‘Good job Camryn, I’m so proud of you.'”

You can definitely expect to see more from Miss Camryn Green!