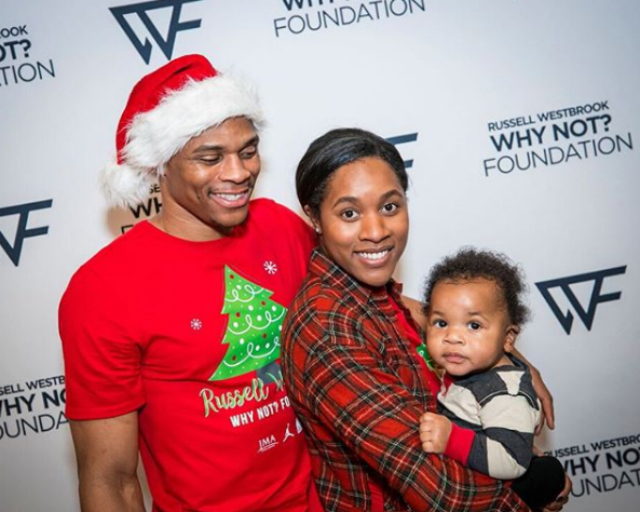 Nina Russell Westbrook is excited to celebrate Christmas with their son. The celebrity couple recently got into the holiday spirit at their Why Not Foundation charity event in which little Noah was in the spotlight.

“Yesterday the @whynotfoundation hosted another successful Christmas party for all of the lovely families at the City Rescue Mission,” Nina told her Instagram fans on Wednesday. “My family joined in on the fun, and we are always so blessed to be able to help spread love and support in the community.”

Love was definitely in the air as a precious moment between Russell and his son was captured. The celebrity father showered his little son with kisses as the youngster smiled. “So cute,” one follower exclaimed. “You all are truly a blessing to this community and the State of Oklahoma,” another fan wrote online. “Thank you for just being you.”

Yesterday the @whynotfoundation hosted another successful Christmas party for all of the lovely families at the City Rescue Mission. My family joined in on the fun, and we are always so blessed to be able to help spread love and support in the community.

The Why Not Foundation was created by Russell Westbrook to inspire youth to reach for the stars in everything they do in life. According to the charity’s website,

“The mission of the Russell Westbrook Why Not? Foundation is to inspire the lives of children, empower them to ask ‘Why Not?’ and teach them to never give up.”

Russell has definitely exhibited the notion of endurance throughout his career. The basketball player’s focus has changed a bit since becoming a father several months back.

“I think the moment we knew we were having Noah was the moment it changed me,” Russell said during a recent ESPN interview. “For the good, obviously. You start to think about the things that best benefit him. Everything in life revolves around him.”

Even Russell’s practice sessions revolve around his son. “It’s a balance,” he revealed. “I like to get to the gym early. I get here first and work on my game. But Noah wakes up really early, and I might have been gone on the road for six or seven days, and he hasn’t seen me in a while. Then I’m staying at home. Which is OK, because that’s more important to me than anything. That’s just something I’ve had to get used to.”

LUDACRIS: 'MY NEW YEAR'S RESOLUTION IS TO GET A BOY ... WE'RE GOING TO TRY ONE MORE TIME'

LUDACRIS: 'MY NEW YEAR'S RESOLUTION IS TO GET A BOY ... WE'RE GOING TO TRY ONE MORE TIME'