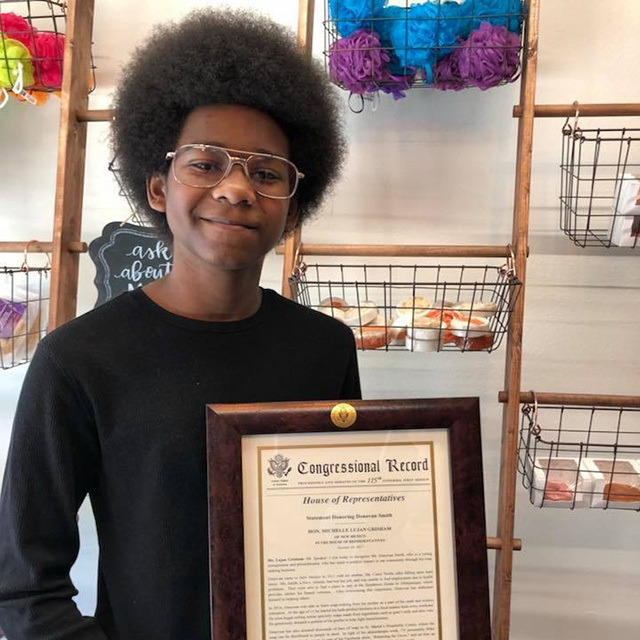 Donovan Smith is just like any other kid his age, but what sets him apart from the rest, is the fact that he has his own business, he is an advocate for child abuse victims, he invests a lot of time in charity work, he has received several awards, among those, the Youth Choice Award recently presented to him at the McDonald’s 365Black Community Awards.  Additionally, Smith can tout that he even has received a letter from President Obama and the first Lady.

In 2011, Smith and his single mother found themselves living in a homeless shelter, in New Mexico when she lost her job and their apartment, due to health reasons.  For six months, the Henderson House was their home. The two were eventually able to move into special housing for veterans and it was that move that propelled the young man with a big heart towards his path of inspirational greatness.

When Smith was 11, his mother taught him the basics of soap making and he figured out the rest through a series of classes.  At first, he sold his bath products in person, every weekend, securing a booth at the Rail Yards Market. “Every week,” his mother commented to The Washington Post, “he was up at 4 a.m. on Sunday, packing his wagon with all of his soaps.” The products for which Smith became known are elaborately designed and look like glazed doughnuts, corn on the cob, cupcakes, cookies, hamburgers, eggs and snow globes. Shortly thereafter, his business went from the Rail Yards Market to his own Etsy Store-Toil and Trouble, inspired by Macbeth.

Well, fast forward to 2017. Smith no longer has to sell his soaps online or at farmers markets because the 14-year-old is the proud owner of a brick and mortar store as a result of his dedication to help others.

Recently, the Smith’s were surprised by TV show host, Mike Rowe, while filming a new show entitled, Returning the Favor. Rowe, “returned the favor,” by giving Smith the keys to his own store front in downtown Albuquerque.

“We were just taken by surprise this was all in the works for Donovan,” Casey Smith, Donovan’s mom commented to KRQE News 13. “It’s a really really wonderful feeling to know your child is having a positive impact on the world.”

Congratulations, Donovan! We can’t wait to see what amazing ways you will continue to inspire.