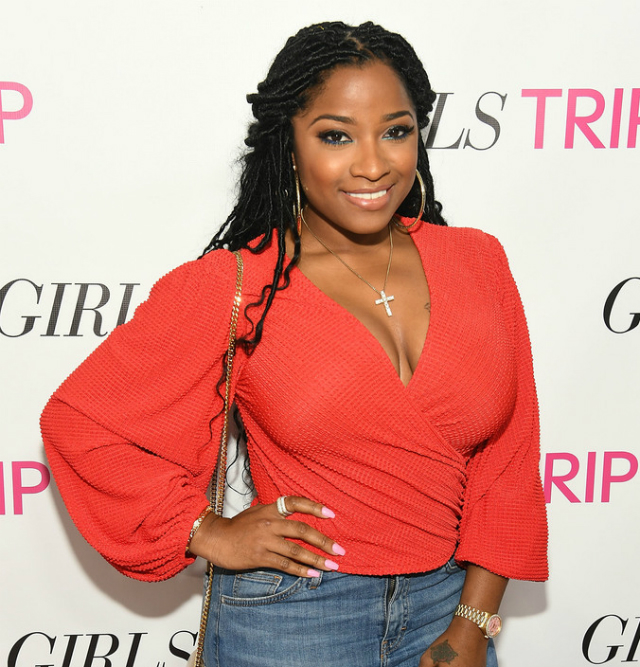 Toya Wright is pregnant with baby number two! The celebrity mom announced her expectancy on Thursday with a unique video clip that featured her adult daughter, Reginae Carter, and an actress who posed as a psychiatrist named Dr. Stevenson.

Stevenson comes to evaluate Reginae in the clip but ends up describing the 18-year-old’s mom instead. “So Reginae,” the doctor begins. “What seems to be the problem? Trouble in school? Communication? Teen pregnancy?” Reginae responds with, “That’s not me. That’s her,” before pointing to her mom who’s sitting beside her daughter. The music playing in the background halts abruptly as Toya shrugs her shoulders and cradles her bump.

My most important job will always be mom. #back2work #YouJustDontGetIt 10:26:17

“My most important job will always be mom,” the celebrity parent shared with her Instagram followers. “Book Promotion and Pregnancy Announcement,” one fan said in response to Toya killing two birds with one stone by advertising her upcoming book, You Just Don’t Get It, while also sharing news of her expectancy. “I love it,” the follower wrote.

Toya’s good friend Monyetta Shaw initially told her Instagram fans that Wright is expecting a baby girl. She later clarified on BCK’s Instagram page that it’s too early in the pregnancy to determine the sex of the baby. Monyetta wrote, “Hey guys! Was moving entirely too fast this morning and could have sworn that I put both nephew and niece… I have NO clue and think that it’s too early to detect.” Toya also affirmed that the child’s sex is unknown.

Not so fast! #ToyaWright says she does not know the sex of the baby ! Thanks for clarifying @toyawright ! See previous posts… #bck#pregnant

“Very little is known about the father’s child, but we hear her future baby daddy is her boyfriend that she’s been dating for almost a year. We’re told he’s a sports manager/agent, who manages high-level athletes.”