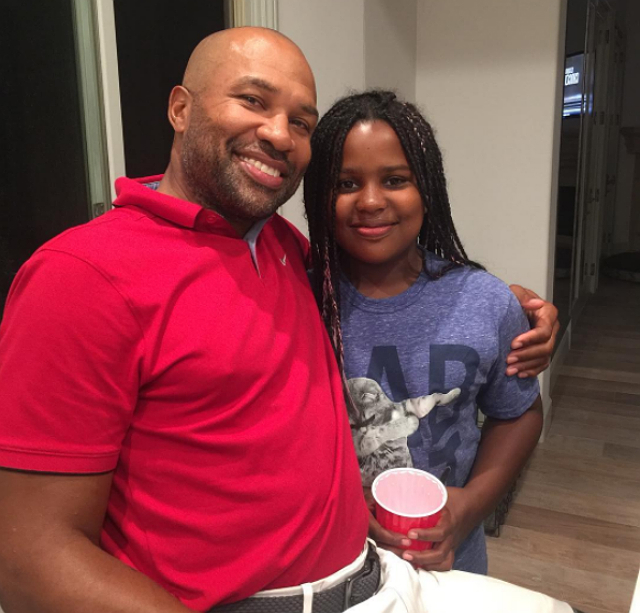 Well, this is a rarity. Derek Fisher has gone from paying $124,000 in both spousal and child support to $0. A judge recently halted the 2016 order that required Derek to pay his ex-wife, Candace, $109,000 per month for spousal support in addition to producing $15,000 per month in child support for the couple’s twins, Tatum and Drew.

“Fisher filed paperwork over the summer asking the judge who presided on his 2016 split from Candace to halt his ongoing $109,000 in monthly alimony and $15,000 a month in child support payments because he’s no longer working as a coach for the New York basketball franchise. A judge later signed off on the modification, according to court docs.”

She stood up 2 cancer before she could even walk!! Love you Tatum! You inspire me everyday! ?????#StandUp2Cancer

Derek worked as the head coach of the New York Knicks for nearly two seasons before being cut by the team’s executives last year. The Knicks were 17-65 during Fisher’s first season, which was from 2014-2015, and were 23-31 last season before the decision was made.

Phil Jackson, the former coach of the Los Angeles Lakers and current president of the Knicks, hired Derek in hopes of the former Lakers player turning around the team’s poor performance. “I know it’s a relief for him, taking away some of that stress from the job,” Phil said after joining other executives in the decision to release Derek.

Dear Drew, I love you son! Daddy is not perfect but my love for you is!! ??#fathersonmoments

“[Derek is] also a person I have a long relationship with and care deeply about and hope for his success,” Jackson continued. “It’s time for us to make a change, turn this team around and move forward and get some wins and keep going down the road we started here at the beginning of the year.”

Derek Fisher’s updated child support and alimony are set to take effect next year. Lawyers from both Derek and Candace’s side will need to sign off on the agreement before it is final.

TYRESE GIBSON'S EX ACCUSES HIM OF BEATING THEIR DAUGHTER; HE FIRES BACK