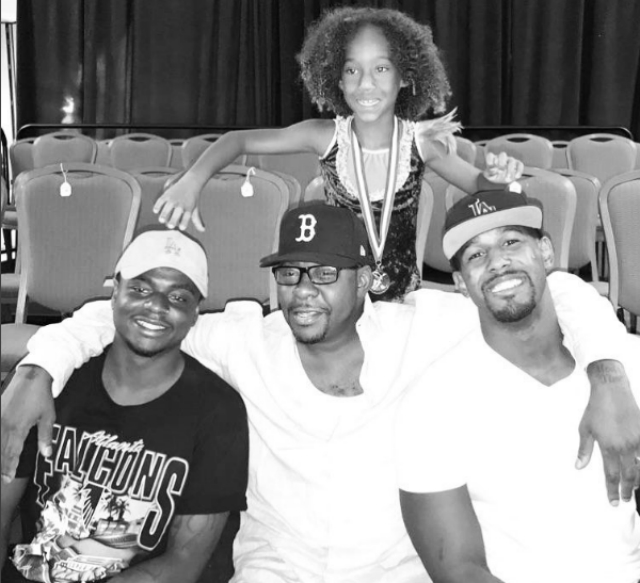 Brown served as backup vocals to Cassius’ dance routine, which was nothing short of superstar material. The youngster moved from side to side, did a few spins, and even used his hands to get his message of exuberance across. “This kid stole my show,” Bobby told his Instagram followers. “You gotta love Cassius,” one fan exclaimed. “He’s going to be awesome!”

It was just last week that Bobby and wife Alicia Brown celebrated their youngest daughter Hendrix Estella’s first birthday. The celebrity couple shared a cute picture of the little one in which she wore a sparkling hat that bore the number one atop. Hendrix arrived on July 10, 2016, at Cedars-Sinai Medical Center in Los Angeles. The little one arrived at 10:54 a.m. “Just had a baby girl,” Bobby told fans. “Ten pounds,” he gushed.

This past week was quite remarkable for Bobby Brown as it also marked the second anniversary of Bobbi Kristina’s death. The 22-year-old was taken off life support in 2015 nearly six months after she was found in the bathtub of her Georgia home. Bobby shared a tribute to his daughter that also highlighted the importance of reporting domestic violence last Thursday. “Today we remember you #BobbiKristina,” Bobby wrote. “Love shouldn’t hurt,” the celebrity father hashtagged.

Today we remember you #BobbiKristina ? #eN?ough #LoveShouldntHurt ? ? SAY HER NAME – NEVER FORGET IF YOU OR A LOVED ONE IS IN IMMEDIATE DANGER PLEASE CALL 911 !! We have established a relationship with The National Domestic Violence Hotline. If you are in need of help and resources NOW please visit http://www.thehotline.org/ They have operators live now in every state to assist you with your immediate needs. #eNough #stopdomesticviolence? #BOBBIKRISTINABROWN @bobbikristinaserenityhouse @kingbobbybrown Original Song by Adele "Someone Like You"

A post shared by Bobbi Kristina Serenity House (@bobbikristinaserenityhouse) on Jul 26, 2017 at 9:50am PDT

Bobby Brown is the proud father of seven kids.