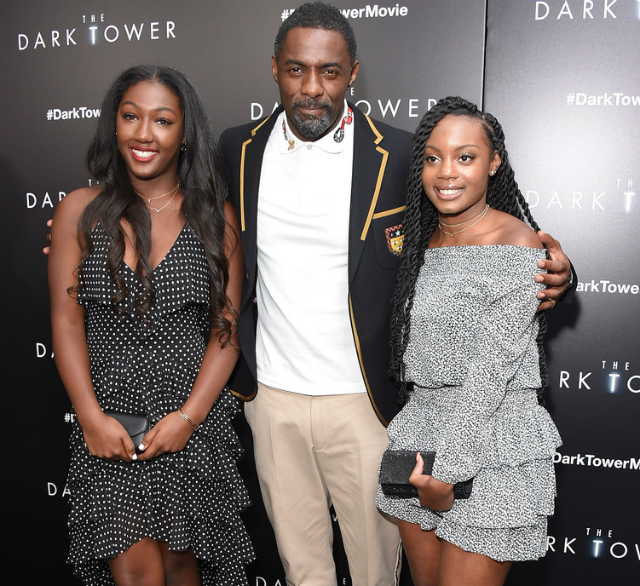 Idris Elba took on the red carpet with his daughter, Isan Elba, by his side at The Dark Tower New York Premiere on Monday. The celebrity dad stood between his daughter and the guest that she brought as photographers took pictures.

Isan’s attire was fashionable from top to bottom. The teen wore red heels to accessorize her black polka dotted dress, which was the ideal choice for summer wear. Idris was also fashion forward with loafers that completed his collage of styles.

The celebrity dad is one of many actors in The Dark Tower. In fact, the film centers around Elba’s character, Roland Deschain/The Gunslinger, who is determined to go to any length to defeat his foe, Walter O’Dim or The Man in Black (Matthew McConaughey). O’Dim is focused on toppling the Dark Tower and destroying humanity, but Deschain is not willing to let that happen without a fight. Who will win the battle? You’ll have to wait and see when The Dark Tower hits theaters on Friday, August 4, 2017.

Idris Elba spoke with Complex about his character in The Dark Tower a few months back. “I was excited to sign on for the role because [Stephen King] does create complex, well-rounded characters with a lot of depth—and Roland Deschain, in particular, is a character that has a massive, massive journey throughout the book series,” the actor explained.

Elba went on to tell the magazine, “I want the fans to be satisfied by the character I portray especially since the characters are so well written in the book. However, the wonderful thing with being an actor in film is that I am able to interpret the character and I hope the fans are proud of our interpretation.”

TYRA BANKS EXPLAINS WHY SHE WAS FORCED TO SHARE SON'S PHOTO