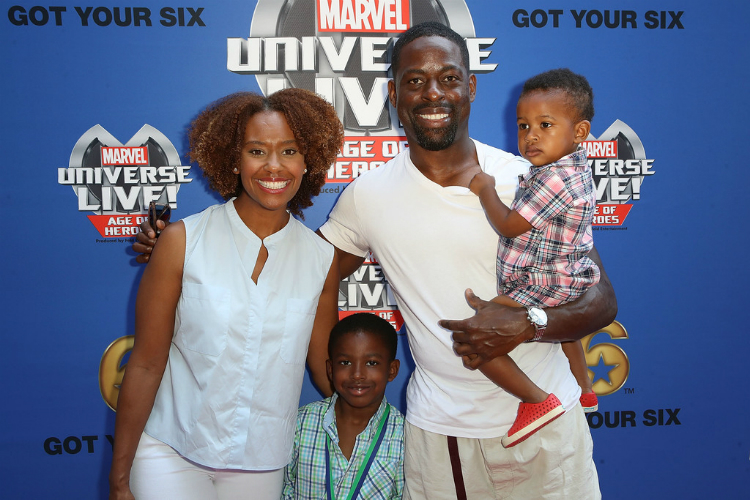 Sterling K. Brown was joined by his wife, Ryan Michelle Bathe-Brown, and kids at Marvel Universe LIVE! Age Of Heroes World Premiere this past weekend. The celebrity father and his family wore casual attire to the event.

Age Of Heroes is Marvel’s live production that brings Spider-Man, The Avengers, and Guardians of the Galaxy together. The main goal of all members of the team is simple: defend the universe from the forces of evil.

“Our tremendously talented creative team and a nearly super human cast, have created a show that brings the grandeur of Marvel to life,” Juliette Feld, producer of Marvel Universe LIVE!, says. “Age of Heroes creates an experience that immerses families in non-stop action, creating movie-style thrills and jaw-dropping stunts that showcase the powers of your favorite Super Heroes right before your eyes.”

Fans have become accustomed to seeing Marvel’s greatest superheroes on the big screen or reading about them in comic books. It will be interesting to see how the producers of this onstage masterpiece bring the action to audience members in playwright format.

“I’m extremely excited to work on Marvel Universe LIVE! Age of Heroes and bring the talents and powers of these amazing characters with such dimensionality to life,” Marvel’s Chief Creative Officer Joe Quesada says. “Audiences will be on the edge of their seats as they witness the outrageous stunts and fight sequences in truly a unique experience that puts fans at the center of the action.”

Sterling K. Brown certainly knows about keeping viewers on the edge of their seats. His performance as Randall Pearson in season one of This Is Us was nothing short of eye-opening.

“What I love so much about the show and about the character of Randall is that he is black on purpose,” Brown said during a recent interview with Hollywood Reporter. “The fact that he is black and we actually use that to tell the story of a black man being raised by this white family and still has the experience of being black in America … The feedback I get from people is, ‘We don’t get a chance to see this that often: a successful black man married with two children who is happy and succeeding but still has to deal with the fact that life is not the same, the paths that we walk are going to be different.'”

Sterling K. Brown is the father of two children. Season two of This Is Us premieres on Tuesday, September 26 at 9 pm. on NBC.