Home » Upcoming » COMPTON, CA SISTERS AGES 4 AND 6 ARE SET TO TAKE THE GOLF WORLD BY STORM

COMPTON, CA SISTERS AGES 4 AND 6 ARE SET TO TAKE THE GOLF WORLD BY STORM 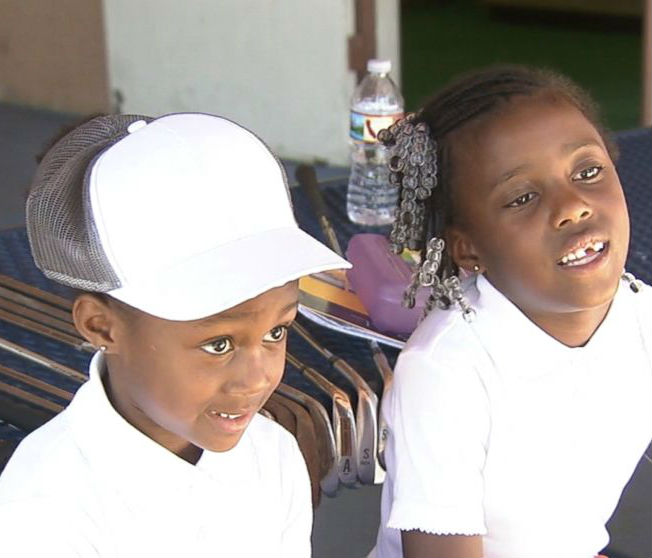 Golf is a difficult spot at best for the pros; however, for a tiny four-year-old and six-year-old, it should be impossible, right? Well, guess again. The Phillips sisters from Compton, CA are proving that they have mad skills on the golf fairway and that their swing is almost as good as the pros.

Both sisters, six-year-old Layla and four-year-old Roxy, learned to play golf at two-years-old. The family used to live next to the Maggie Hathaway Golf Course in South LA. After their mother wrote to the  course and asked them to do something about all of the golf balls landing in their backyard, the family was offered an apology and free golf lessons. Who could have guessed that that would have been the catalyst jump start a bright future on the green.

Recently, Layla won a Southern California PGA drive, chip and putt competition, qualifying her for a junior world competition in Sand Diego, where she will compete against a myriad of international competitors.

“They are very, very good,” commented Luis Batson, CEO of Help Youth Through Golf, a nonprofit organization that teaches the game to young people in Compton, Long Beach, and the Paramount areas, to ABC News. “I can only compare them to the sisters Williams in tennis.”

The two sisters of course are garnering world-wide attention for their small stature and strong swings; however, their mother says that education first and the rest will come. “In our family, education is always the first priority,” Jasimen Phillips said to ABC News. “So our first goal is full-ride scholarships to Stanford. Everything else after that is icing on the cake.”

Check out the video below and see how the girls describe their love for the game in their own words. It would not surprise us at all to see them both earning their green Master’s jackets sometime in the future. These two are definitely ones’ to watch!

HERE'S HOW YOUR FAVORITE CELEBRITY FAMILIES COMMEMORATED THE 4TH OF JULY