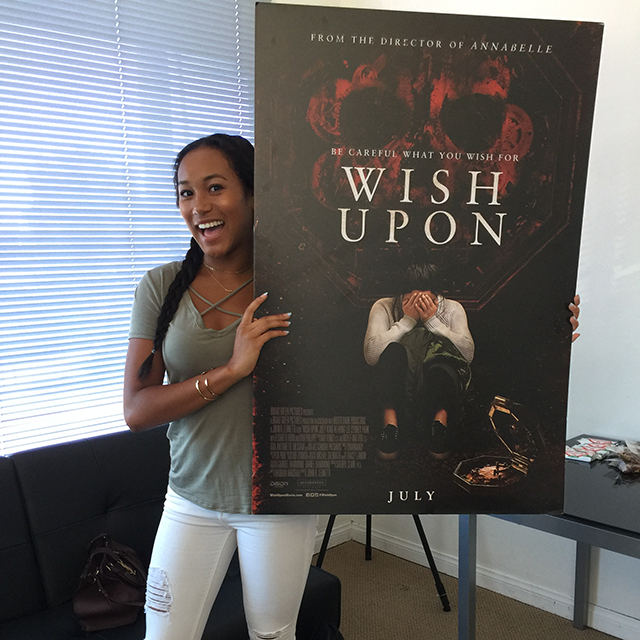 Wish Upon is probably one of the most anticipated upcoming horror movies of the summer. Starring Sydney Park, Joey King, Ryan Phillippe, Shannon Purser, and Alice Lee, the PG-13 flick will definitely have you thinking twice about making a wish.

BCK had the opportunity to sit down for an interview with one of the stars of the upcoming thriller-Sydney Park. Known for her comedic beginnings, at the tender age of six, the young star quickly rose up the ladder of success making the leap from the famous Hollywood Improv stage to the small screen, appearing on Disney’s That’s So Raven. From there, Park has gone on to guest star in Entourage, have a recurring role on The Walking Dead, and beyond.

Check out the first of our two-part interview(we broke the interview into two parts) with Park and don’t forget to stay tuned closer to the release of Wish Upon, on July 14th, when we will tell you exactly what this Philadelphia native had to say about making wishes that could ultimately kill you!

Beware: there are a few things that can be considered spoiler alerts, so, just like wishing, continue at your own risk.

BCKOnline: How was it growing up as an actress?

Park: I was able to go to normal school up until my tenth grade year, obviously, that was before I got my Nickelodeon show, then I had to transfer to online school. I really am thankful that I was able to have a normal childhood for the most part, aside from doing what less than 1% of the population is doing, which was so so cool. It’s been trippy. I get recognized for That’s So Raven so often, it’s crazy.

BCKOnline: One thing that is coming back is Raven, would you ever step in those halls again?

Park: So, this is crazy, my mom is an acting coach and she’s worked on various Nickelodeon projects, she’s working on a Netflix project right now, and we’ve been close with Ray all these years but she, my mom, actually got a chance to work on the reboot. So, that’s really awesome. And they are shooting on the same sound stage that they shot on like years ago, so that’s pretty cool. I would call my mom and she would be on set working with the kids and I would be like, ‘yo, tell Ray to have auntie come baby sit the kids.’ They are already bringing back her boyfriend, who’s apparently the father of her children, but yeah, I would love to come back as Sydney.

BCKOnline: We live in a world where everything comes back whether on t.v. or not…is there something that would come out where you would just have to be a part of, for example, something from your childhood?

BCKOnline: What’s the difference between doing a series like The Walking Dead and an actual movie?

Park: When you are working on a very tight ship like The Walking Dead, they have been running for 8 seasons now, and it’s very fast paced, you are there for like two weeks to shoot one episode, so, that’s really cool, it’s intense. Wish Upon, we shot in Toronto, it was extremely cold. I can say that in the horror genre, I have worked in extreme weather conditions, which is cool. I’ve worked in the Georgia heat and I’ve worked in the Toronto cold. That’s definitely the major difference. When you are working on a film like Wish Upon, you are on a sound stage sometimes, you are on location sometimes but The Walking Dead, it’s more location, you are just straight up in the woods. That’s like definitely the major differences but they’re both equally as fun, if not maybe one more than the other, but honestly, it just depends.

BCKOnline: In terms of The Walking Dead, do you ever think that the Ocean Side Women will ever join Rick?

BCKOnline: In the movie, your character has a dog, do you have dogs in real-life?

Park: Yes, I have two dogs and three cats. I am an animal lover. I over did it a little bit, I bought a zoo.

BCKOnline: If you had a wish, that could come true, what would it be?

Park: I would definitely wish that Cancer never existed for sure.

Here’s the newest Wish Upon sneak peek. Let us know will you be in theaters July 14th! Don’t forget, stay-tuned for part two of our exciting interview with Parks the closer to the release of Wish Upon.