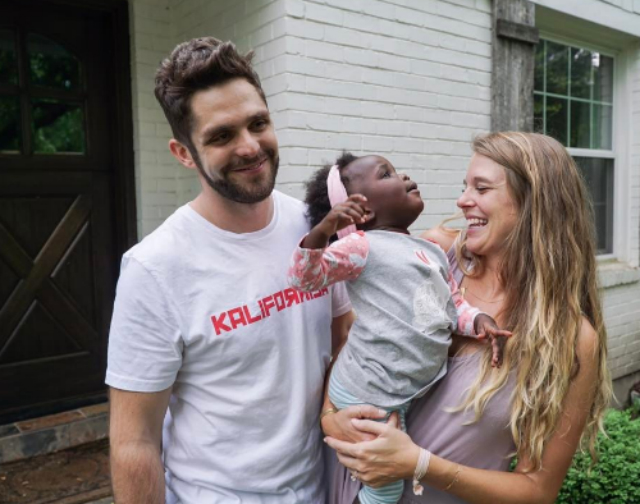 Thomas Rhett and his wife, Lauren, are settling in with their newly adopted daughter, Willa Gray, after a long and strenuous adoption process. The celebrity couple tells PEOPLE exclusively how they came to know their daughter and the challenge of adopting her from Uganda.

“I don’t think anyone can fully prepare you for the journey of adopting someone, especially from a third-world country where there are so many different laws,” Thomas says. “Every day you wake up with a whole new set of challenges that you never even heard of.”

Although Thomas and his wife initially had the idea of expanding their family through pregnancy, the couple began focusing their attention on adoption after learning of Willa’s heartwrenching story. “She was a total orphan and didn’t have any biological relatives, no one,” Lauren says. “Her life was going to be at the children’s home unless someone else tried to give her a home. So I thought, ‘We need to find her a home.’ I thought we’d be the helpers — and then Thomas Rhett said, ‘We’ll do it!'”

Thanks @kaileydickerson for Willa's first pair of noise cancellers for her first TR show this weekend!??

The Rhetts’ decision to adopt little Willa was simple but the process of legal guardianship was anything but easy. “The hardest part was never knowing when it was going to end,” Thomas says. The celebrity father reveals that he and Lauren were mandated to foster Willa in Uganda before being considered as candidates for adoption.

“I’m pretty sure every flight was booked a day before we left either place, because you can’t plan it,” Thomas explains. “We’d get there and realize we had to be there another two weeks. Things moved at a snail’s pace.”

The road to adoption was bumpy but Willa was worth the wait. “It’s something we’ve worked for and hoped for for so long and it’s just a dream come true,” Lauren says. “She really does live up to her nickname in Uganda: She is just the biggest little Blessing that ever has walked the earth.”

Babe.. not only are you the hottest mom you are the sweetest, funniest most kind hearted human being that I know. I know you didn't plan on marrying a singer when you were sitting in your 3rd grade class room but I'm so glad you did. I couldn't imagine my life without you. Seriously you know how lost I get when you are gone for 2 weeks? I love you so much and happy 1st Mother's Day. You already are a rock star at being a mom. You + me+ Willa

Willa Gray will soon be a big sister as Lauren and Thomas Rhett are expecting their second child to arrive in coming weeks. Check out the clip below to see Willa Gray warming up to the music days before her big debut on stage with dad at C Spire LIVE this past weekend!