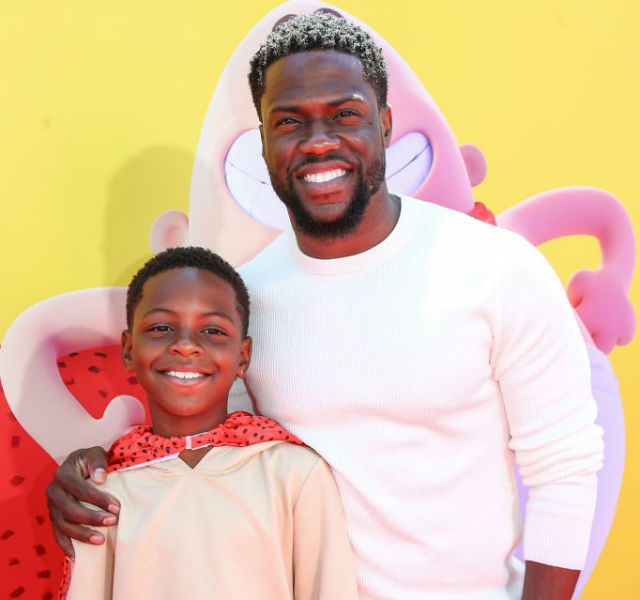 Kevin Hart and his son, Hendrix, were two of many celebrities in attendance at the Captain Underpants premiere this past weekend. The comedian and his “mini me” made quite an appearance on the red carpet.

“My son put a cape on me in the middle of one of my interviews on the red carpet today,” Kevin told Instagram fans on Sunday. “I asked him what the cape was for and he said it was because his dad is Superman….I swear my kids blow my mind more and more every day,” the celebrity father gushed. “I love you son. Continue to make your dad proud. You’re doing a hell of a job!”

My son put a cape on me in the middle of one of my interviews on the red carpet today….I asked him what the cape was for & he said it was because his dad is Superman….I swear my kids blow my mind more & more everyday. I do it all for them….I love you son. Continue to make your dad proud. Your doing a hell of a job! #Harts

Heaven, Kevin’s daughter, was not able to attend the premiere due to prior engagements but Kevin didn’t let the day pass without acknowledging his daughter. “My little girl couldn’t make it because she was destroying her opposing soccer team this morning but she was there in spirit,” Kevin wrote online. The celebrity father also encouraged his subscribers to check out Captain Underpants, which promises to be nothing short of hilarious.

Anyone who has read one of the books in the series knows that George and Harold are the ultimate pranksters. Viewers will get to see the story line from the beginning in this first “epic” film as George and Harold hypnotize their principal to the extent of him believing that he is Captain Underpants. Hilarity ensues as the administrator walks around in a red cape and underwear.

The laughs begin on June 2, 2017, when Captain Underpants hits theaters. Check out the movie’s trailer below!