CHANCE THE RAPPER AND DAUGHTER TAKE IN A BASKETBALL GAME 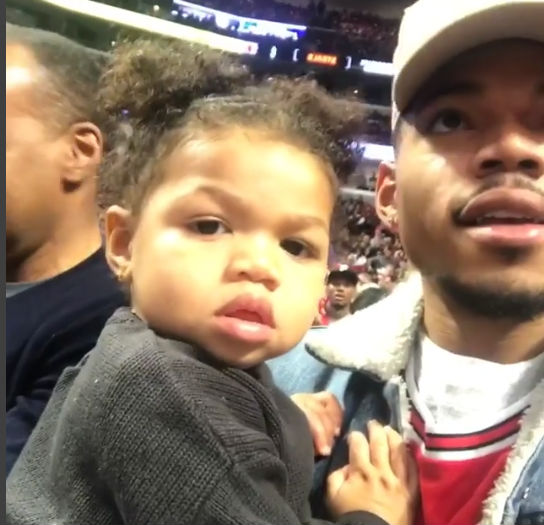 Chance the Rapper and his daughter, Kensli, are all about the Chicago Bulls. The recording artist shared video clips of his little one hanging out at Wednesday’s game against the Brooklyn Nets.

One clip showed Chance and Kensli paying close attention as the Nets scored a point over the Bulls. “Yeah, they just scored, though. It’s cool,” Chance said. The moment certainly proved to be one of few as the Bulls beat out the Nets with a final score of 112-73.

It was just a few weeks ago that Chance the Rapper partnered with the Chicago Bulls to give funding to the Chicago Public School system. “As a private citizen, as a parent and a product of C.P.S, I’m asking that you guys join the fight with me. Organize with me. Mobilize with me,” Chance said during a press conference at Westcott Elementary School. The educational institution was the first recipient of Chance’s overall $1 million donation.

“It is my job, just as who I am, to bring light and attention to public school funding, broken formulas and especially how it affects my hometown where 90% are minority students,” the rapper added. The Chicago Bulls later joined Chance in pledging $1 million to the city’s public school system.

Kensli is Chance the Rapper’s only child. She celebrates her second birthday in September.

See how Kensli and Chance the Rapper prepared for Wednesday’s game below!