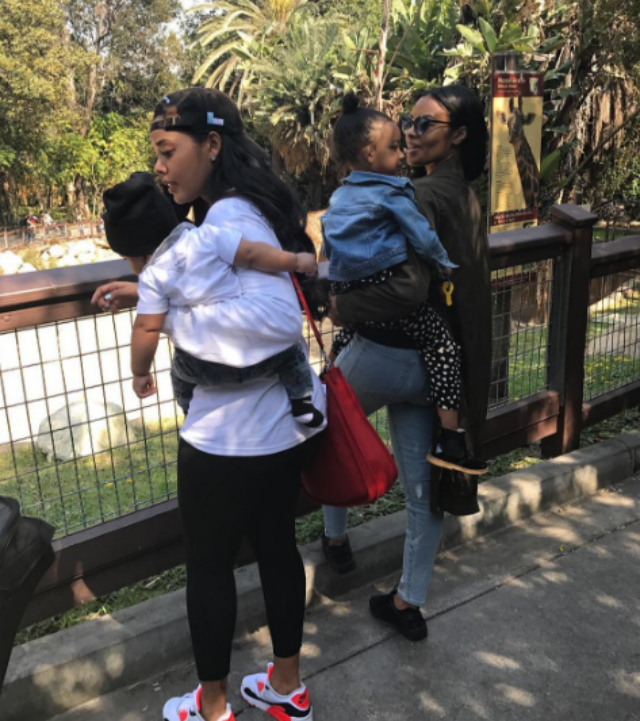 What better way to celebrate your week than with family? Sutton Tennyson has enjoyed the company of numerous loved ones this week with visits from his aunt Vanessa Simmons and cousins, Ava and Kenzo.

Angela captured several Kodak moments, which included one of her and Vanessa exploring the zoo with their kids. “Family outing,” the celebrity mom told her Instagram followers. “@vanessajsimmons and Ava !! And my little one !! #SisterLove.” Both of the star moms learned new things while carrying their kids around the venue on their hips. Ava and Sutton also took in the sights as they were chauffeured around by Vanessa and Angela.

Little Sutton got a visit from his cousin Kenzo as well this week. Kimora Lee Simmons’ son held Angela’s little one in his arms while posing for the picture. “Look who we found,” Kimora exclaimed. “Cousin love,” she wrote.

Sutton has changed every aspect of Angela’s life. The celebrity mom often dotes on her son and has an additional drive to be successful because of Sutton.

“Being your mommy brings me my greatest joy,” Angela recently told her son online. “Your love is so pure. Your smile and laughs make my day (EVERYDAY). Thank you, God, for sending me one of your Angels. He is my reason.”

Sutton is Angela Simmons and fiance Sutton Tennyson Sr.’s only child together. The little one celebrates his first birthday later this year. Check out more pictures from Sutton’s adventurous week on the next page!