Home » Upcoming » JAIDEN HARVEY IS TWIRLING HER WAY TO SUPER-STARDOM

JAIDEN HARVEY IS TWIRLING HER WAY TO SUPER-STARDOM 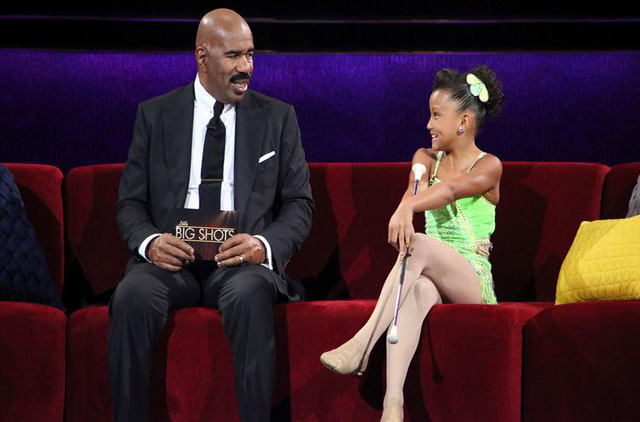 Daytona Beach resident 9-year-old Jaiden Harvey is already a national champion in her own right. Appearing on Steve Harvey’s Little Big Shots, the third-grader at Calvary Christian Academy in Ormond Beach showed the audience what twirling baton for four years and practicing three hours a day actually looks like.

“I practice a lot. Practice makes perfect,” Harvey said. “I love to twirl.”

Little Big Shots host Steve Harvey definitely had fun with Jaiden’s last name. “He didn’t know until I started talking to him about it,” she said. “Oh, my gosh. He is so funny. IF you make him laugh, he laughs so funny. And he’s silly and he’s nice.”

Michelle Harvey, Jaiden’s mom, also twirled when she was younger and says that her daughter has “two absolutely amazing coaches” at Encore Baton and Dance Studio” and that her daughter “…has this unbelievable drive.”

In addition to twirling, Harvey also wants to pursue both an acting and modeling career. We have no doubt that we will be seeing this young lady on both the big and small screens real soon!