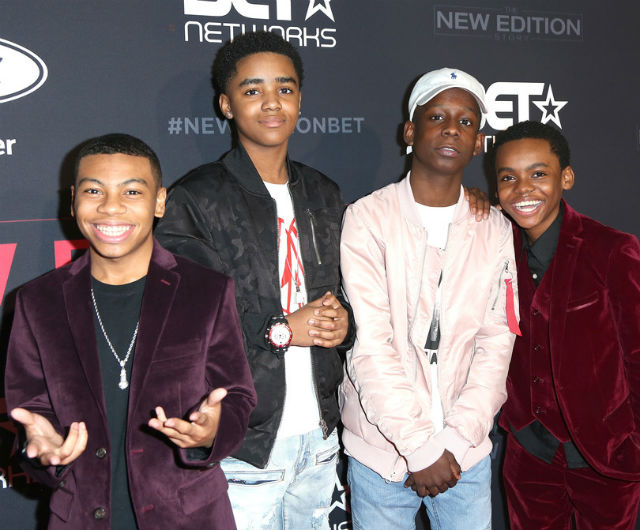 If you immediately recognize the names: Ralph, Ronnie, Bobby, Ricky, and Mike, then you definitely listened to music in the 80s and were possibly a super fan of New Edition. It is almost without a doubt that you will be poised in front of the t.v. tonight to stroll down memory lane as BET kicks-off its three-day, six-hour biopic— The New Edition Story. The miniseries, will follow the career, from beginning to end, of the five boys from the Orchard Park housing project, in Boston’s Roxbury neighborhood, who became one of the most prolific R&B boy bands of the 20th century.

Caleb McLaughlin, Myles Truitt, Jahi Winston, Tyler Marcel Williams, and Dante Hoagland, start off the special, portraying the original New Edition members as kids. “’We got lucky’ with the younger cast members,” comments Jesse Collins, an executive producer of the biopic, in an interview with AJC.com. “We wanted to take them as far as we could, then bring in the adults. Technically, we could have cast five more actors to play 12 to 15-year-olds, but just finding the actors they did was difficult enough.” Yet, these young stars, definitely bring it, causing the viewers to almost not want them to grow-up.

The series will cover more than twenty years of New Edition history, taking viewers from the preteen years to focusing on the group well beyond their 30s, chronicling the trajectory of hit records, sold-out concerts, and worldwide fame.

BET president Debra Lee, announced yesterday at the packed screening at Paramount Pictures in Hollywood, CA that “we are bringing the most original content ever to BET Networks…,” dubbing it the network’s “’year of yes’—‘yes’ to black, ‘yes’ to our stories and ‘yes’ to New Edition.” President of programming Stephen Hill echoed Lee’s sentiment stating that, “we know our audience, we know what they relate to, what they respond to and ‘New Edition’ is just the start.”

Tune in tonight, 8/9PM EST to kick-off the “year of yes” with BET. But, in the meantime, get your “Candy Girl” dance moves ready for tonight.